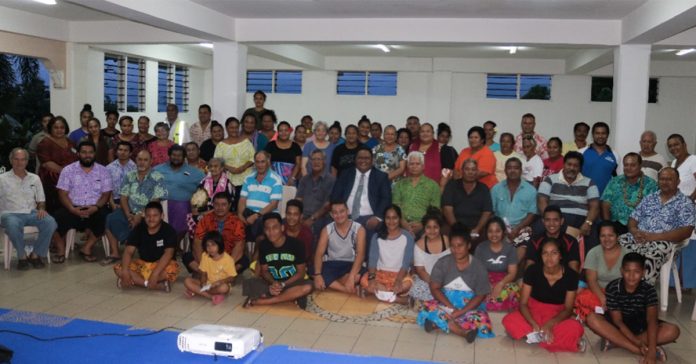 19 villages in areas affected by flooding from the Vaisigano River in 2012 and 2018 have so far been consulted. The majority of those consulted welcome and support the proposed Alaoa Multipurpose Dam project. While welcoming the Government’s intention of building a multipurpose dam to combat flooding from the Vaisigano River; to act as a buffer to protect lives, homes and livelihoods of hundreds of residents in the downstream area of the Vaisigano River, participants were concerned about dam safety and wanted reassurance that it would not rupture and exaggerate flooding and threaten the lives and properties of those living downstream. The village of Apia unanimously supported the development but added conditions for the Alaoa Multipurpose Dam project to consider; providing adequate drainage behind the flood management walls currently being implemented under the Integrated Flood Management to Enhance Climate Resilience of the Vaisigano River Catchment project funded by the Green Climate Fund.

Concerns on dam safety were addressed during consultations with the majority now fully understanding and reassured of the magnitude of technical investigations, engineering plans and preparations being undertaken by EPC and top international engineering firms hired to research and design the multipurpose dam.

Also during consultations, EPC’s two top engineers reassured the public that the EPC Samasoni Header Pond and pipes were not the cause of flooding during Cyclone Evans in 2012. The flash flooding was a one in 100year flood event resulting in too much water flowing downriver causing widespread damage and loss of lives. The Samasoni Header pond in fact assisted in collecting most of the logs from the flash flood which would have washed downstream and added to the damages. While the Samasoni pipes were indeed wiped away by flash flood in 2012, no water came from the pipes as the Header Pond was blocked with logs, rocks, sand and debris. This was also evident with the flash flooding during Cyclone Gita in 2018, where no EPC pipelines were damaged, yet flooding still occurred and again affected hundreds of those living downstream from the Vaisigano River. Based on lessons learnt from the 2012 and 2018 flash flooding, EPC has buried the whole Samasoni pipe line; this to give people easy access to their properties and, to enable quick evacuation during emergencies. Villages were also assured that the current access road to plantations and lands above the proposed location will be improved to ensure there is continued access by landowners. Social safeguard surveys are currently underway and will determine if any residents of villages near the proposed project site will require resettlement. Archaeological surveys are also being undertaken to determine if any cultural sites will be affected but thus far, no cultural nor historical site has been identified within or near the proposed project site.

As we continue our consultations, we invite members of the public, especially those living within or near the Vaisigano River, to seek further information from Fonoti Perelini Perelini, Project Manager at EPC through the following contact number: 7571840; perelini48@gmail.com or Leaupepe Satui Bentin at satuib@gmail.com; 7515944. We acknowledge the continued support of our partners; MNRE and SWA at these consultations and in the planning stages of this project.