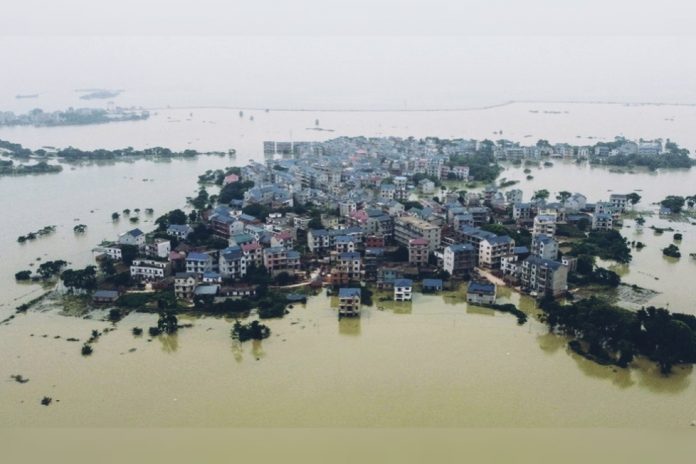 Scientists say that a rapid drop in emissions because of Covid played a key role in record rainfall in China in 2020.

Hundreds of people died and millions more were evacuated during a summer of record rainfall.

But long-term cuts in emissions are unlikely to trigger similar events.

Many parts of eastern China experienced severe flooding in June and July in 2020. The researchers say the reductions in emissions contributed about one third of the extreme summer rain.

Since early June 2020, heavy rains caused by the regional rainy season led to floods severely affecting large areas of southern China including the Yangtze basin and its tributaries. Rains and floods extended to central and eastern China during July and were described as the worst since at least 1998. The Yangtze river saw the heaviest rainfall since 1961, with a 79% increase in June and July compared to the average for the period over the previous 41 years.

According to China’s Ministry of Emergency Management, by the end of June flooding had displaced 744,000 people across 26 provinces with 81 people missing or dead. As of 13 August, the floods had affected 63.46 million people and caused a direct economic loss of 178.96 billion CNY. Reports confirmed 219 people were found dead or still missing, and 54,000 houses collapsed. The Ministry of Water Resources said that a total of 443 rivers nationwide flooded, with 33 of them swelling to the highest levels ever recorded.

A number of scientific studies have looked at what caused the flooding events, some pointing to the extreme conditions in the Indian Ocean.  However, an international team has now put forward a new theory. They argue that the abrupt reduction in emissions of greenhouse gases and aerosols, caused by shutdowns during the Covid-19 pandemic, was a key cause of the intense downpours. In their study the authors show that over the past four decades summer rainfall over eastern and central China has decreased significantly due to the increase in the number of aerosols in the atmosphere.  These particles, often associated with the burning of coal, can reduce the occurrence of large-scale storms which resulted in lower rainfall.

This new study says that the absence of these particles, and lower greenhouse gas emissions in 2020 caused the opposite effect – a major increase in rain.

However, the chain of events that connects the pandemic shutdown to the floods is quite complex.

“There was heating over land due to aerosol reductions but also cooling over the ocean due to a decrease in greenhouse gases, which intensified the land/sea temperature difference in the summer,” explained lead author Prof Yang Yang from Nanjing University of Information Science and Technology, in China.  “This in turn, increased sea level pressure over the South China/Philippines sea and intensified the winds bringing moist air to eastern China which then saw intense precipitation.”

Most governments around the world are looking to reduce emissions of warming gases and aerosols through shifting their energy systems away from fossil fuels. Is there a danger that in making this shift they could provoke extreme events like the ones experienced in China in 2020?

“Because emissions were reduced dramatically in early 2020 when the Covid-19 pandemic emerged, it caused an immediate and abrupt change in various components of the climate system.”

“Such sudden change of the climate system would be very different from changes in response to continuous but gradual policy-driven emissions reductions.”

The new study has been published in the journal, Nature Communications.