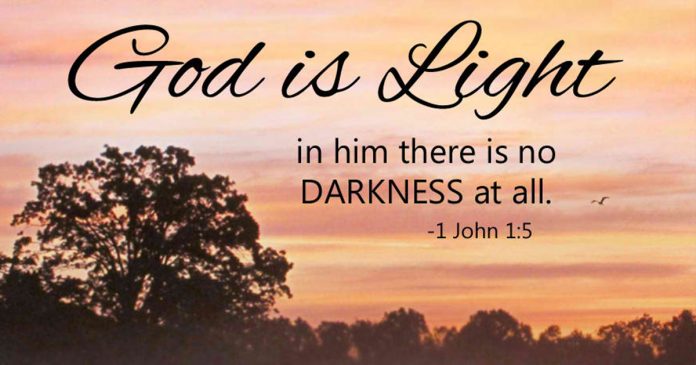 God is light, and in him is no darkness at all.

In Him Was Life, and the Life Was the Light of Men

The first five verses of John’s gospel say quite a lot about Jesus. It is a grand introduction to the Son of God and the Savior of the world. The rest of the book is a record which was written to show “that Jesus is the Christ, the Son of God; and that believing you may have life in His name.” (JOHN 20:31).

John, the son of Zebedee, was a Jew familiar with the customs and feasts of Israel. He was an apostle of Jesus and an eyewitness of Jesus’ ministry . He observed that Jesus was tired as he sat by the well in Sychar, a city in Samaria. He was present at the final Passover. He specifies that it was the right ear of Malchus that Peter cut off with a sword in the misguided attempt to save Jesus from arrest. Clement of Rome, as early as 96 A.D. indicates a knowledge of John’s gospel. It seems to have been written between 80 and 95 A.D., while the other three gospels, Matthew, Mark and Luke were all finished by about 70 A.D. The reason this is important is because there is a rather large group of liberal, modernistic scholars who contend that the gospels were gradually compiled by early Christians in later generations to justify their faith, and were not written by inspired men present during the timeframe of Jesus’ ministry and the book of Acts. But both historical references as well as the nature of the accounts themselves show otherwise.

JESUS THE WORD: HIS RELATIONSHIP TO GOD

“In the beginning was the Word, and the Word was with God, and the Word was God. He was in the beginning with God.” (JOHN 1:1,2). In the first century, it  was the Gnostics who were denying the deity of Christ. They were the wise of the age, the ancient counterparts to the modern, liberal skeptics. John’s gospel, as well as his epistles, are an answer to such infidelity.

In much the same way as we use words to express ideas, the Son is God’s expression of Himself. Later, verse 14 identifies the Word as the One who “became flesh and dwelt among us.” In this way, the Word explained God to us.

There are three things which we learn in the first two verses about the Person who became Jesus of Nazareth. First, that He was in the beginning with God. The Bible does not say He had a beginning, but that He was already there “in the beginning.”

Second, that He was “with God.” He was in fellowship with the Father. The Scriptures show that He was equal with God, but “did not regard equality with God a thing to be grasped, but emptied Himself, taking the form of a bond-servant, and being made in the likeness of man.” (PHILIPPIANS 2:6,7).

Third, we see that “the word was God.” He possesses the characteristics of God, such as His eternal nature; His identity; His purpose and His mind. While Jesus certainly subjected Himself to human limitations during His incarnation (HEBREWS 2:17,18; 4:14-16; PHILIPPIANS 2:8), He did not become a different person. Even as He walked on earth, He was still the eternal One (JOHN 5:18; 8:56-59; 11:30-33; 20:28). Regarding that last reference; any doctrine that makes one feel uncomfortable addressing Jesus as “My Lord and my God” is not a Biblical doctrine whether it comes from a liberal modernist, a member of a cult or even a misguided brother or sister in Christ!

JESUS THE LIFE: HIS RELATIONSHIP TO CREATION

“All things came into being by Him, and apart from Him nothing has come into being that has come into being. In Him was life…” (JOHN 1:3,4a). One of the most used phrases in the Genesis account of creation is, “And God said…” When God spoke, it became so. In the creation, we witness the power, majesty and wisdom of God. The creative force which acted to bring all things into existence was not impersonal, but rather a living being. He is called “the Word” and He is eternal, He is with God and He is God.

The One we came to know as Jesus was the active agent in creation. The Genesis account makes it clear that there is a plurality of Persons that are included in the one God we worship. The Bible says, “Then God said, ‘Let us make man in Our image, according to Our likeness….” (Genesis 1:26). The Word carried out this determination of the mind of God.

Some say the concept of a plurality of Persons as one God is difficult to understand. I agree, but I am not one who expects that it would be easy to comprehend all the facets of our eternal God. Certainly, if the Bible can speak of a man and woman “becoming one flesh” (Genesis 2:24) then it can also speak of the Father, Son and Holy Spirit as being “one God.”

There are several passages which speak of the Son’s role in creation. God created “all things” which He “carried out in Christ Jesus our Lord.” (EPHESIANS 3:9-11). Again, speaking of the Son; “For by Him all things were created, both in the heavens and on earth… all things have been created by Him and for Him. And He is before all things, and in Him all things hold together.” (COLOSSIANS 1:16-17) and “in these last days has spoken to us through His Son, whom He appointed heir of all things, through whom also He made the world.” (HEBREWS 1:2).

JESUS THE LIGHT: HIS RELATIONSHIP TO MAN

“…and the life was the light of men. And the light shines in the darkness, and the darkness did not comprehend it.” (JOHN 1:4b-5). The phrase “and the life was the light of men” is in the Greek imperfect tense. This means that “the life” began to be “the light of men” in the past and continues to be so in the present time. The Son of God is the source and essence of life itself. When lost in darkness and death, the best place to look for redemption is the source of all life (Jesus, the Son) and not the source of death (Satan, the adversary). The wages of sin is death, but the free gift of God is eternal life in Christ Jesus our Lord.” (ROMANS 6:23).

Even as the Son first gave physical life to the creatures of the world, and just as He continues to “uphold all things by the word of His power” (HEBREWS 1:3), He offers spiritual life to the spiritually dead and eternal life to those who live by faith. In the darkness of suffering and sin, as evil and wickedness continues to have such a cruel impact on our existence in this world, it would seem as if people would be flocking to the light that has come into the world. But that is not the way it is!

“And the light shines in darkness, and the darkness did not comprehend it.” The sad truth is darkness is opposed to the truth. Many have closed their hearts and  minds to the light. They choose to ignore it, neglect it, or even oppose it. Many have come to “love darkness” and “hate the light” because “their deeds were evil” (JOHN 3:19-21). The final result of this kind of rebellion is eternal darkness; a final separation from the light. But this also means a final separation from all that is good; from love, joy and peace. It means never ending sorrow, tears and pain. Do not retreat from the light! It leads to life!