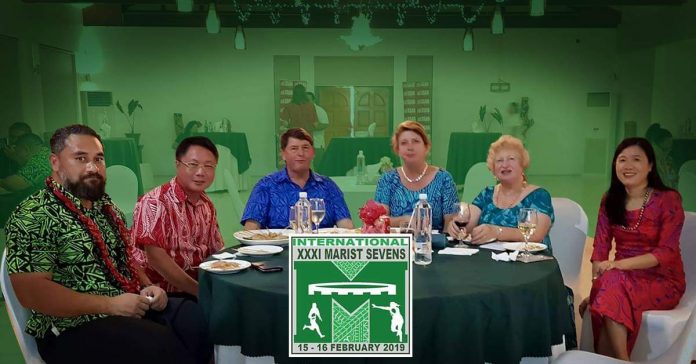 A full contingency of Samoa’s development partners were in attendance as keen supporters for Samoa’s longest running international sporting event. High Commissioners of New Zealand and Australia as well as the Ambassador of China have all vouched their support for the tournament which expanded last year to include a women’s division.

One of the main announcements of the evening was a tribute to the late Tupua Fred Wetzell, through the renaming of the men’s championship trophy in honor of his contribution to rugby sevens over the years.

President of Marist St Joseph’s Sports Club Faimalomatumua Mathew Lemisio says, “This is in recognition of the lifetime contribution that the late Tupua Fred Wetzell had made to Marist over the past many years. We are grateful to the Wetzell family for continuing their father’s legacy through their support to the Marist International 7’s.”

Tournament Director Fata Brian Kaio says that the 3 objectives of the international event, now in its 31st year, is to identify new rugby talent, prepare players for international representation and promote social stability through the empowerment of youth and women.

Fata Brian Kaio adds that a key objective of hosting a women’s division is to provide a platform to promote gender equality.

“The addition of the women’s division last year was a way to make the tournament more inclusive and create a platform to empower women and promote gender equality.

“This year, there are twice as many teams in the women’s tournament, and we have also pushed the prize money up from $3k to $5k”

28 mens teams were announced last night, with a record 5 clubs from Savaii.

“We are really excited about the keen interest from clubs in Savaii because it attests to the development of rugby on the Big Island. We have teams from Gataivai, Iva, Sapapalii, Safotu and of course Salelologa who have been relegated to the top 8 this year.”

The Marist Auckland side will return to defend the trophy, joined by Tabadamu from Fiji, Christchurch Samoa and Mountfort Brothers.

Upolu sides include Apia, Vaiala, Vailele, Tepatasi, SCOPA and Marist St Josephs in the top 8, with another 8 local teams vying for this years’ cup trophy and $20 thousand tala prize money.

The tournament kicks off at the ACP Stadium Lotopa on Friday 15th February 2019.