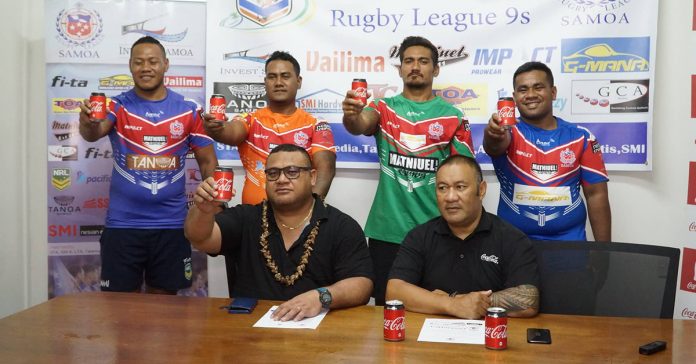 Six teams will go head to head with each other at the 9-a-side league tournament starting this Saturday.

According to the President of the Samoa Rugby League Tagaloa Fa’afouina Su’a during the launch at Lotopa last night, this is the first of its kind in the history of Rugby League in Samoa.

“The tournament will run for four consecutive weeks except for the week when the Marist International Season has their sevens tournament on the 16th of Feb,” he said.

“The finalé of the tournament will be held on the 22nd of February and there will be teams from Queensland and Auckland and also we have been confirmed there will be a team from the Kingdom of Tonga as well.”

Six teams will be competing four local teams and two overseas teams from Queensland and Auckland will be here for the competition.

“There will be players eligible for selection in the Pacific games side in July this year,” he said.

“I’m sure you are also aware that this is the first time in the Pacific Games that we will have a women’s competition.”

He also revealed, more tournaments are in the pipeline for rugby league this year.

“In preparation not only for the July 9s but also the World 9’s Tournament in October so most of the players will be selected from the elite players overseas but that doesn’t stop the opportunity if one or two can prove themselves to be in that team which will be held in Sydney, Australia,” he said.

“Also in the pipeline an emerging nation’s world 9s is schedule to be held here in Samoa in  2020.

“So we need to build our 9s because you are all aware that PNG, Fiji and all our neighbouring countries are well versed with the 9s property so we have to cope with the changes and keep up with the current minimum standards that is required of a player to be able to compete on that required level.”

“We wish to commend Rugby League Samoa for having such a great programme ahead of them this year and we look forward to supporting not only in this market but also our international market with the Toa Samoa brand and RLS joined together with Vailima.”

Vailima provide a cash component valued at $20,000 tala and in kind products for teams every Saturday.