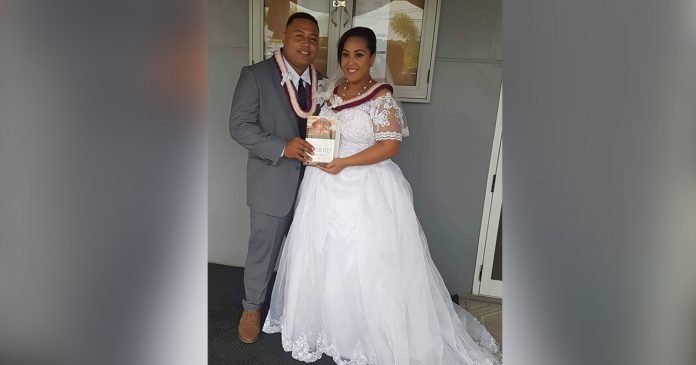 The 26th of January, will forever be engraved in the hearts of Amosa Junior Gaseata and Memory Lafaele.

As this was the day they exchanged their vows before God, their families and friends in a holy matrimony.

Their union was blessed by Pastor Faafetai Fata of the Apia Harvest Church.

After years of courting, they decided to take their relationship and their journey to the next level as husband and wife after they said their “I do’s”.

Memory is the daughter of  Fuimaono Tofilau Tagaloa Fritz and Serah Mataia Fuimaono.

The 24 year old who works for Samoa Stationery and Books at Vaitele as a Senior cashier and salesperson and is from the villages of Siusega, Vaimoso and Faleula.

Speaking to the Samoa Global Memory said they first met at SSAB Togafu’afu’a.

“I first saw him at SSAB not knowing he was stalking me,” she said smiling.

Her older sister Poima Lafaele described her younger sister as a humble and loving person.

As for groom he is the son of Liuoli Tau and Ili Talailama who works as an Officer of the Parliamentary Committee.

“My dream is to be together with the love of my life and the queen of my heart,” says Amosa.

“It was indeed love at first sight.”

Asked what their plans are in the future Amosa said to serve God in any way and take care of his little family.

The reception was held at the Tanoa Tusitala.