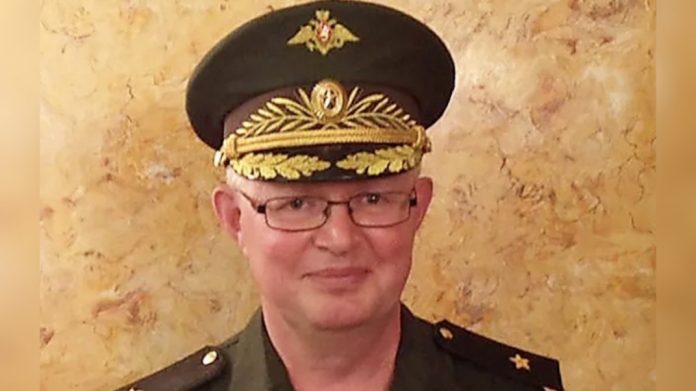 1 May 2022, Russia-Ukraine by Will Stuart.  Vladimir Putin has lost his ninth general of the war in Ukraine, according to reports.

Major General Andrei Simonov, 55, was killed in battles in Izyum near Kharkov, the country’s second city, according to Ukrainian sources.

He was Russia’s most respected electronics warfare commander, serving with the 2nd Combined Arms Army.

Simonov died in a devastating fightback by the Ukrainians against a Russian offensive. More than 30 Russian armoured vehicles were reportedly destroyed.

Unconfirmed reports say around 100 Russians troops were killed in the Ukrainian assault.

A video released by Ukrainians on social media purported to show the attack in which Russian forces appeared to be taken by surprise and defenceless.

Military experts say this is an astonishing rate of attrition.

Mr Putin has sent his chief of defence staff General Valery Gerasimov to take personal command of the Russian offensive in eastern Ukraine.

But Simonov’s death, alongside 100 Russian troops and the reported loss of armoured vehicles, indicates another setback for the Kremlin leader who aims to declare the success of his mission on 9 May, Victory Day in Russia.

Simonov, from the Kirov region, was a graduate of the Tomsk Higher Military Command School of Communications and was seen as Russia’s military leading electronics warfare specialist.