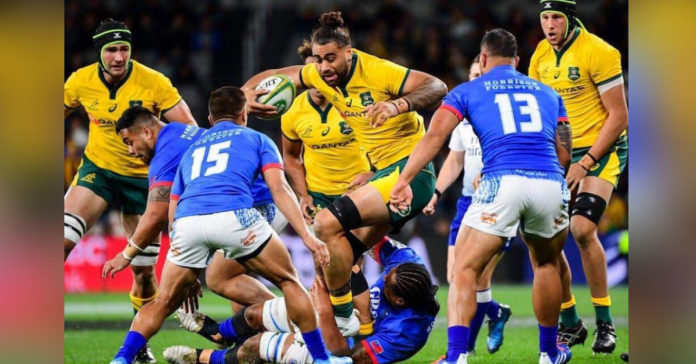 7 September 2019 Sydney Australia. A valiant Manu Samoa outfit have fallen short to a strong Australian Wallabies side in Sydney tonight.

Despite Manu Samoa coming out with positive energy in their defence line speed and confidence in their attack, Australia were first to strike after 7 minutes with a try by lock Adam Coleman.

Samoa finally came alive again when No. 8 Afaesetiti Amosa, carrying hard from the scrum gave the visitors momentum for their backs to spark some razzle dazzle.

Samoa looked to have scored through Michael Alaalatoa but the call was overturned by the TMO. Samoa didn’t leave empty handed and turned their hard work into 3 points.

Having conceded 3 points Australia hit back immediately after the kickoff with a try to 100+ test match veteran Adam Ashley Cooper. Just minutes later Lukhan Salakaia-Loto again crossed over for Australia taking the hosts’ halftime lead to 22-3.

Manu Samoa came out a different team in the second half. A change to Samoa’s entire front row brought on the more experienced trio of Logovii Mulipola, Motu Matuu and Paul Alo-Emile. The change saw Samoa dominate scrums. The solid set piece lead to Amosa fly off the back of another scrum to put Dwayn Polataivao in for Samoa’s first try.

Off the back of more scrum penalties, Samoa broke Australia through the midfield. Rey Lee-Lo made the break followed by a couple of good draw and passes to put Polataivao in for his second try.

With the score at 22-15 Samoa had momentum and was back in the game. But Australia stayed cool, calm and collected. The men in Green and Gold put away Samoa with tries to wing Dane Haylett-Petty and Mat Toomua (of Samoan heritage).