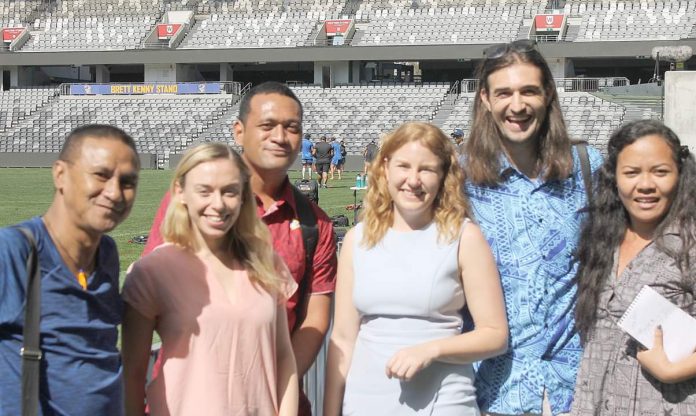 7 September Sydney Australia. By Nanai Laveitiga Tuiletufuga in Sydney.  Over the next 5 years, Australia will be investing AUST$40 million dollars to fund its new PacificAus Sports initiative.
And Samoa along with five Pacific Island countries will reap the fruits of Australia’s labour of love from the ambitious program aimed at further enhancement of the people’s link through sports between Australia and her Pacific neighbours.

To be spread out from 2019 to 2023 four Samoan journalists are the pioneer flag carriers for the country in the Program through their participation this week in the historic Manu Samoa Wallabies test fixture in Sydney to provide media coverage.

And Australia’s initiative is not without notice
“It’s another testament of Australia’s continued generosity to her Pacific neighbors,” compliments Samoa’s Prime Minister Tuilaepa Sailele Malielegaoi who is also Chairman of the Samoa Rugby Union.
“Professional sports for the Pacific Islanders is a source of livelihood for families whose sons and daughters have secure lucrative contracts overseas,” elaborated Tuilaepa. “And I’ve been informed that one of the PacficAus Sports targets is designed to create more opportunities for talented and gifted Pacific Island athletes to realize their full potentials to become the next generation of world class and professional athletes in their respective disciplines.
“To that effect I am looking forward to the Program’s positive outcome and results that will benefit the original 6 Pacific island recipients,” he continued. “On that note, I applaud and extend my appreciation to the Government of Australia on behalf of the Pacific Islands.”

For Australia’s High Commissioner to Samoa, Ms Sara Moriarty the inclusion of Samoa’s media practitioners reaffirms the mutual ties of friendship and cooperation between the two countries.
“Australia is excited to be supporting the historic Wallabies v Manu Samoa Test in Sydney tomorrow through PacificAus Sports, a flagship initiative of Australia’s Sports Diplomacy 2030 Strategy’,” complimented the High Commissioner.

“The Test provides an opportunity for Australians and Samoans to come together to celebrate the excellence of our sports people,” she continued.
“I’m particularly happy that we were able to support four Samoan journalists to cover the Test and ensure all Samoans can experience their team in action ahead of the World Cup.”

AUSTRALIA’S PACIFIC SPORTS LINKAGES PROGRAM
The journalists’ assignment to provide media coverage for the Wallabies Manu Samoa test is supported by the Australia-Pacific Sports Linkages Program, administered by the Office of the Pacific within DFAT.
It is a flagship initiative of Australia’s Sports Diplomacy 2030 Strategy.
The program aims to strengthen Australia’s people-to-people connections with the Pacific through our shared love of sport.
It will strengthen Australia’s sporting links with the Pacific over the next five years by:
1. Developing pathways for Pacific teams to play in
high-level Australian sporting competitions;
2. Supporting Australian teams to increase their presence and participation in the Pacific; and
3. Creating pathways for emerging athletes from the Pacific to benefit from Australian coaching and training.
Initially, the program will focus on six countries;
• Fiji
• Papua New Guinea
• Samoa
• Solomon Islands
• Tonga
• Vanuatu
And targeting the four sports with the strongest public following in the Pacific such as;
• Football
• Netball
• Rugby
• Rugby league.
In the coming years there will opportunities to extend the program to other Pacific island countries and other sports over time, particularly to support emerging athletes.
Australia will providing AUST$15 million dollars to fund the five year project.

SAMOA
For Samoa, Australia is funding a number of activities to help build interest and momentum for the program, including those with a specific focus on Samoa. These include:
1. Support for Rugby Australia’s Get into Rugby sports for development program, to deliver new sporting kits to Samoan communities in the second half of 2019;
2. Comprehensive funding to assist the preparations of Samoa’s national netball team to train and prepare for the 2019 Netball World Cup (12-21 July); and
3. Support for Netball Australia development of a new training resource (online and instructor-led), to assist coach development in the Pacific. Once developed, this coaching tool will be available in three languages to start (English, Tongan and Samoan).

SPORTS DIPLOMACY 2030
Together with the Office for Sport, Tourism Australia, Sports Australia and Austrade, DFAT has developed the new sports diplomacy strategy – Sports Diplomacy 2030. The Strategy was launched on 1 February 2019 by the Minister for Foreign Affairs, the Hon. Marise Payne. It aims to support closer collaboration between Australian sports codes, industry and government. The approach was based on extensive consultation with the Australian sports industry.
To help deliver these goals the strategy is organised around four strategic priority areas:
1. Empower Australian sport to represent Australia globally
2. Build linkages with our Indo-Pacific neighbours
3. Maximise trade, tourism and investment opportunities
4. Strengthen communities in the Indo-Pacific