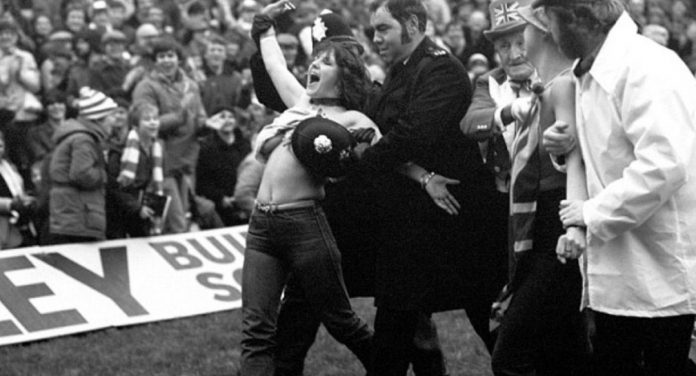 January 2, 1982 — Described by the BBC as “perhaps the most famous of all streaks,” 24-year-old Erika Roe stripped to the waist on this day and bounced onto the pitch at London’s Twickenham Stadium during a rugby international between England and Australia.

January 2, 1982 — Described by the BBC as “perhaps the most famous of all streaks,” 24-year-old Erika Roe stripped to the waist on this day and bounced onto the pitch at London’s Twickenham Stadium during a rugby international between England and Australia.

Her dash onto the pitch with a friend (Sarah Bennett) – partly caused, she said later, by alcohol – came at half time.

“I still can’t really explain what happened,” she said in an interview. “It was very unlike me.

“But on that day, it was a case of just being swept up in the atmosphere, which was electric. At half time, someone said, ‘Isn’t this where someone is supposed to streak on the pitch?’ and that was it — I just went. I ripped my top off, then my bra.

“When I heard a roar I thought that the game had restarted and I thought I must get off the pitch. But then I realised that the crowd was yelling in appreciation of me.

“The next thing, I was shrouded in a Union Jack flag carried by an England supporter and marched off by policemen.

“It’s still a bit of a blur. I don’t even know where I left my clothes.”

Ms Roe, a boarding school girl whose father ran a tea estate in Africa, was working at that time in a book shop. Now married, she moved later in life with her husband and three children to Portugal where she became an organic farmer of sweet potatoes.

For the record, England beat Australia by 15 points to 11. Other vital statistics from that day, which are not recorded by the Rugby Football Union, the game’s governing body, are that Ms Roe’s bosom – displayed to 60,000 spectators and millions on television – measured an ample 40 inches.