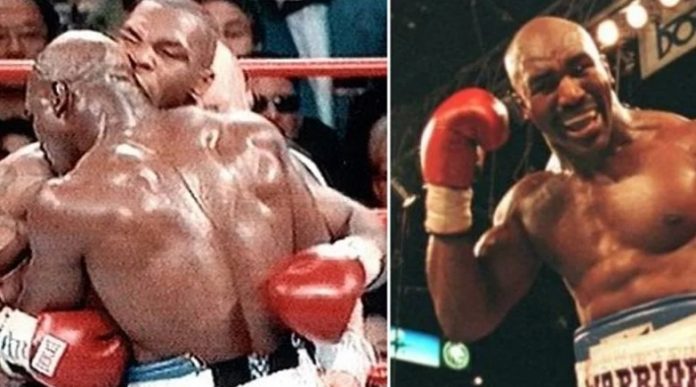 28 June 1997: A WBA Heavyweight Championship fight promoted as “the Sound and the Fury” between Evander Holyfield and Mike Tyson II, was afterwards infamously referred to as “the Bite Fight”.

It was a rematch between the champion Evander Holyfield, a veteran with 20+ years of experience, and the legend Mike Tyson, who held the championship for over 3 years.

The fight that could have easily been one of the greatest fights in the history of boxing, is instead recorded as one of the most bizarre fights in boxing history, after Tyson bit off part of Holyfield’s ear.

The 28 June 1997 fight was a rematch after boxing heavyweight Evander Holyfield ended Mike Tyson’s 3 and a half year long title reign, on the 9th of November 1996 at the Grand Garden Arena in Paradise, Nevada. Evander Holyfield dethroned Mike Tyson and claimed the WBA heavyweight world title, setting up a highly-charged sequel with a then-record pay-per-view audience tuning in.

Tyson was disqualified from the match and lost his boxing license, though it was later reinstated.

The fight took place at the MGM Garden Arena in Las Vegas Nevada officiated by Mills Lane, who was brought in as a late replacement when Tyson’s camp protested the original selection of Mitch Halpern (who officiated the first fight) as the referee.

The match began with Holyfield dominating Tyson. Holyfield won the first three rounds. At 2:19 of the first round, an overhand right punch from Holyfield stunned Tyson, but Tyson fought back immediately pushing Holyfield backwards. At 32 seconds into the second round, Holyfield ducked under a right punch from Tyson. In doing so, he head-butted Tyson, producing a large cut over the latter’s right eye (although trainer Ritchie Giachetti believed the injury happened in the first round). Tyson had repeatedly complained about head-butting in the first bout between the two fighters. Upon reviewing replays, referee Mills Lane stated that the headbutts were unintentional and non-punishable.

As the third round was about to begin, Tyson came out of his corner without his mouthpiece. Lane ordered Tyson back to his corner to insert it. Tyson inserted his mouthpiece, got back into position, and the match resumed. Tyson began the third round with a furious attack. With forty seconds remaining in the round, Holyfield got Tyson in a clinch, and Tyson rolled his head above Holyfield’s shoulder and bit Holyfield on his right ear. The bite avulsed a one-inch piece of cartilage from the top of the ear, and Tyson spat out the piece of ear onto the ring floor. As Holyfield shrieked in pain and jumped in circles, he managed to push Tyson away, at which point Lane called for a time-out. As Holyfield turned to walk to his corner, Tyson shoved him from behind. Lane sent Tyson to a neutral corner as an enraged Holyfield gestured for Lane to look at his bitten ear, which was bleeding profusely.

The match was delayed for several minutes as Lane debated what to do. Lane’s original decision was to immediately disqualify Tyson, but after the ringside doctor determined that Holyfield was able to continue despite the bite, Lane announced that he would be deducting two points from Tyson, and the match would continue. Bobby Czyz, who was calling the match with Steve Albert for Showtime said, “I wonder how this would have played in Mitch Halpern‘s eyes,” and Albert told Czyz, “That’s a thought, Bobby.” As Lane explained the decision to Tyson and his cornermen, Tyson asserted that the injury to Holyfield’s ear was the result of a punch. “Bullshit,” Lane retorted. The fight was resumed.

During another clinch, Tyson bit Holyfield’s left ear. Holyfield threw his hands around to escape the clinch and jumped back. Tyson’s second bite just scarred Holyfield’s ear. For the time of the second bite, Lane did not stop the match, and both combatants continued fighting until time expired. The men walked back to their respective corners, and when the second bite was discovered, the match was halted again.

After the match was stopped, Tyson went on a rampage at Holyfield and his trainer Brooks while they were still in their corner. Lane told Tyson’s corner that he was disqualifying Tyson for biting Holyfield. To protect Holyfield, security surrounded him in his corner, and Tyson was taken back to his corner by security. Lane was interviewed, and said he knew from experience that the bites were intentional. He had told Tyson not to bite anymore, and said Tyson asked to be disqualified by disobeying that order. Holyfield left the ring seconds after the interview, which gave the fans and audience the hint that the match was over. Holyfield told the press afterward that Tyson bit him because he knew he was going to get knocked out, and he chose to lose in a disqualification instead.

Reporters then interviewed Tyson’s instructor, who was upset about Lane’s decision. The instructor said, “They will have to explain that. I do not agree with it but it is what it is…all I know is Mike Tyson has a cut in his eye.”

Twenty-five minutes after the brawl ended, announcer Jimmy Lennon Jr. read the decision: “Ladies and gentlemen, this bout has been stopped at the end of round number three. The referee in charge, Mills Lane, disqualifies Mike Tyson for biting Evander Holyfield in both ears, the winner by way of disqualification and still the WBA Champion of the world, Evander ‘the Real Deal’ Holyfield!” As a result, Holyfield remained the WBA Heavyweight champion.

Tyson later remarked that his recent bites were in retaliation for the headbutts from Holyfield.

Later, during post-match interviews, Tyson was walking back to his locker room when a fan from the venue tossed a bottle of water in his direction. Tyson, his instructor, and a pain manager climbed over a temporary railing and up into the stands, made obscene gestures to the crowd, and made their way up the side of a stairway. Tyson had to be restrained as he was led off. When interviewed about his championship and the incident with Tyson, Holyfield said he already forgave Tyson for biting him since he has 100% faith in God and Jesus