5 March, 2019. It’s the most powerful street-legal car ever to come out of Italy. And when your competitors include Ferrari and Lamborghini, that’s some badge of honour.

It may even be the most powerful road car ever, although when you’re dealing with hypercars (the noun supercar is no longer sufficient) it’s a fine margin between first, second and third.

But being number one is not the most important thing. Because what’s really special about the Pininfarina Battista, being unveiled on Tuesday at the Geneva Motor Show, is this: it’s all-electric.

So, here are some stats. Maker Automobili Pininfarina claims its Battista does 0-62mph in less than two seconds, 186mph in less than 12 seconds, has a top speed of more than 250mph, and does 280 miles on one charge.

Its brake horse power (bhp) is equivalent to 1,900, about twice that of a Formula 1 car (a decent-sized Ford Fiesta, Britain’s best-selling car, has a bhp of between about 84 and 138). 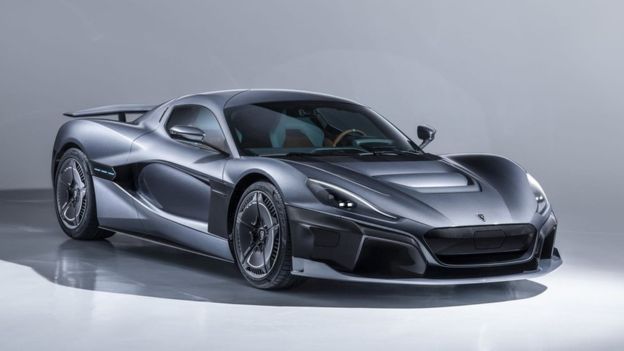 The power “is crazy” says Automobili Pininfarina chief executive Michael Perschke. The car is, he says, a statement that high performance and electric propulsion are not mutually exclusive.

The Battista is not the only hypercar – electric or otherwise – on display at Geneva. And Rimac’s Concept Two car and Tesla’s Roadster have already pushed the boundaries of what is possible with battery technology.

But there’s no doubt that the Battista is one of the most anticipated unveilings at this week’s show, partly because Automobili Pininfarina is little more than a year old

To have leapfrogged some of the industry’s most famous names in such a short time has attracted a mixture of admiration and curiosity.

That said, it wasn’t a completely clean slate. The carmaker is a spin-off of Pininfarina, the legendary Italian design house that helped take many Ferrari and Alfa Romeo cars from the drawing board to production.

So when Mahindra decided to extend the Pininfarina name from car design to car production it brought with it expertise and resources.

Tesla showed that electric cars can be fun, fast and trendy. And with its latest price cuts and sales strategy, the Californian company is pushing further into mass market territory.

Anand Mahindra, chairman of Mahindra Group, said he wants to take Automobili Pininfarina in the opposite direction and prove that electric cars can be luxurious, exclusive and collectable.

“Why is Mahindra betting on the luxury segment? Because there will also be vehicles that people will want to buy because they are objects of desire and passion,” Mr Mahindra says.

Electric vehicles are the future and Mahindra intends to be in the mass market for shared mobility and autonomous vehicles, he said. “But this disruption is not going to affect people’s desire for things of beauty and make the heart beat faster.”

With the Pininfarina pedigree and Italian heritage there are big hopes that the Battista will make electric cars cool, sexy; an electric Ferrari, perhaps. 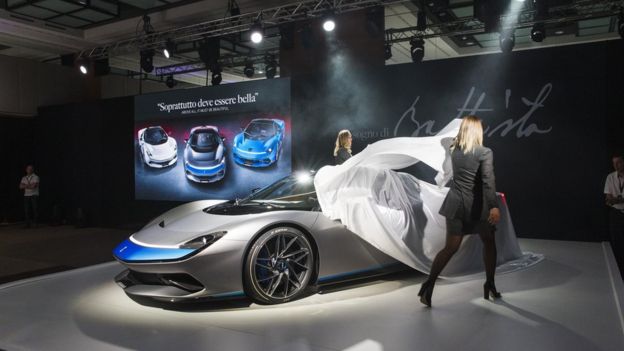 Paolo Pininfarina, chairman of Pininfarina and grandson of the company’s founder, said designing something beautiful was key – not surprising given the heritage. “We are designers, we are Italian. We could not compromise on the car’s beauty,” he said.

“Also, as we are designers, we are not tied to any particular powertrain like Ferrari or Lamborghini. So we could approach the design as a new frontier,” he said.

The T-shaped battery along the centre and behind the seats gave the designers far more space to work with than the internal combustion engines they were used to.

“It created different aerodynamics. We were able to explore and experiment,” Mr Pininfarina said. Cooling is less of an issue than on petrol cars, so it does not have the large grilles seen in many high-performance vehicles.

“To have been able to design a car with such power, torque and speed, and yet emit zero-emissions, is, we think, truly outstanding,” he said.

The Battista – named after Pininfarina’s founder Battista “Pinin” Farina – won’t be the only electric vehicle produced by Automobili Pininfarina.

The plan is for a range of EVs, including a sports utility vehicle, although the intention is to remain firmly in the luxury bracket.

Pininfarina did once try to produce an electric car, in 2008, a project shelved when the company ran into financial trouble. That car promised 30mph in 5 seconds, top speed 85mph and range of 125 miles.

It’s an illustration of just how far electric technology has moved on. But for Mr Mahindra, we’re still only at the start of what emissions-free technology can achieve.