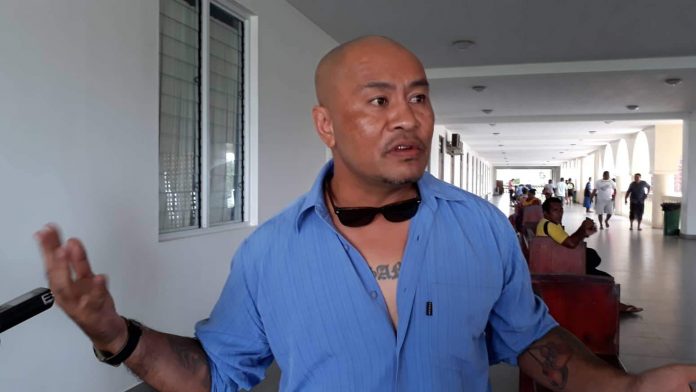 21 March 2019, Mulinuu, Apia Samoa. In a sudden turn of events, Tala “Ninja” Pauga changed his plea to ‘guilty’ during the District Court hearing for his application to leave the country.

The Court had set a hearing date for 17 May 2019, following a ‘not guilty’ plea entered earlier this month by Tala Pauga for the charge of making false declaration on his immigration arrival card.  Today, the Court was in session to hear Pauga’s application to leave Samoa and return in May for his course case.

Standing in for Unasa, Josephine Sapolu submitted to District Court Judge Leota Raymond Schuster that her client wished to return to Australia for work, and to see his children. Pauga’s lawyer also argued that he was in need of medication that could only be supplied in Australia.

Prosecution had provided proof to the Court that the type of medication sought by Pauga was available here in Samoa, however, defense counsel argued that it was important for her client to receive his medication from his own doctors in Australia.  Judge Leota told defense counsel that they should have submitted a report from Mr Pauga’s Australian doctors as part of their submissions.

After almost two hours of submissions, the Court stood down to give Pauga time to consult his lawyer.  When the Court resumed after 15 minutes, Sapolu advised Judge Leota that they wished to withdraw the application to leave the country and it then that the sudden change of plea was made known.

“Your Honour, we would like to make an application to vacate the not guilty plea to guilty, if your Honor is able to hand down your sentencing tomorrow.”

Outside Court, Tala Pauga did not wish to comment, “Talk to my lawyer, I have no comment.”

Speaking to the media, Josephine Sapolu said, “He has changed his plea because he has accepted the charge of false declaration on the arrival card.”

Judge Leota accepted the change of plea and set sentencing for 10am tomorrow, ordering prosecution to provide all necessary pre-sentencing reports by close of business today.