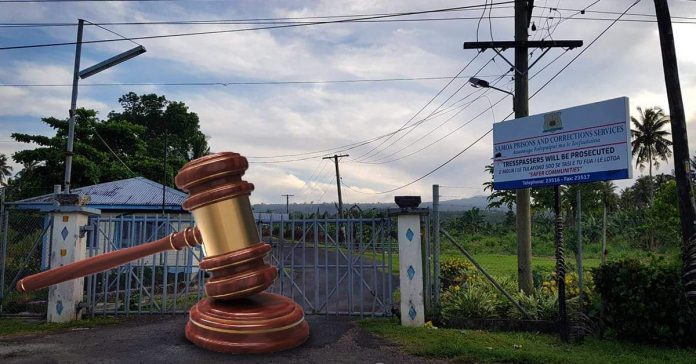 21 March 2019, Mulinuu, Apia Samoa. A prison inmate currently serving time for attempted rape in 2015 has been found guilty and sentenced to an additional two years after prison guards found 291 marijuana cigarettes in his possession.

Iu Moana Pope, 27 of Iva, Savaii appeared before Justice Leilani Tuala-Warren and pleaded guilty to the charge of possession of narcotics which carries a maximum imprisonment term of 14 years.

In delivering her sentence Justice Tuala-Warren reminded the inmate of the seriousness of the offence, committed while he was already serving a  6 year sentence for another crime.

“While serving your imprisonment term you committed this offence of possessing marijuana in prison;

“You say you came into possession of the drugs when another inmate told you to go get it from someone outside the gate;

“You say someone threw it over to you from outside the gate. Your co-defendant pleaded not guilty and is due for hearing at a later date.”

Justice Tuala-Warren outlined the aggravating factors in considering a sentence.

“It is aggravating that you offended while currently serving a term of imprisonment;

“The substantial amount of marijuana cigarettes is also aggravating, two hundred and ninety one;

“You were obviously selling them in prison having had money in the same bucket;

“Given these aggravating factors, the starting point of imprisonment is 3 years;

“I will deduct 1/3 for your early guilty plea;

“You are convicted of possession of narcotics and sentenced to 2 years imprisonment, to be served cumulatively to your current sentence.”