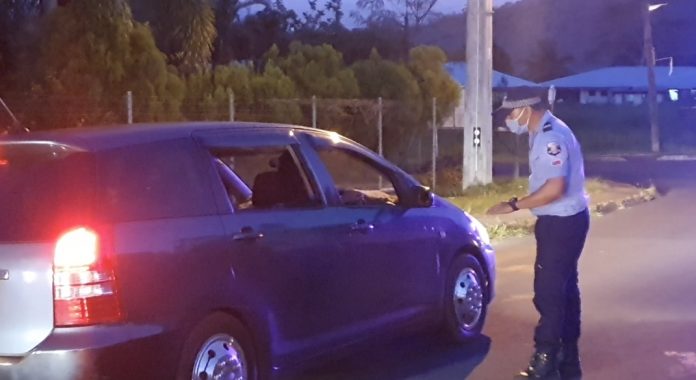 Samoa Police were seen trying to control vehicles that took to the road after 6pm, many unaware of the lockdown extension announced by the Prime Minister at a press conference this evening.

At the Tuanaimato area, cars were seen traveling in all directions and a police checkpoint found that many had left home at 6pm, with no idea Samoa had extended its lockdown.

Police were also seen having to close down small shops and stores that had opened at 6pm to a line-up of awaiting customers. Bakeries prepared fresh bread in anticipation of a 6pm re-open.

Samoa went into a 48-hour lockdown on Saturday 6pm after 15 passengers from a repatriation flight from Brisbane tested positive. Prime Minister Hon Fiame Naomi Mata’afa announced the lockdown would be extended for a further 72 hours after five frontline healthcare workers returned positive tests.

The additional cases takes Samoa’s total to 20, all currently in isolation.

The 5 nurses now confirmed positive are healthcare workers monitoring those in the special isolation ward of Motootua National Hospital.

All five have been in isolation since they have been caring for the positive cases, stated the Prime Minister who also gave assurance that there is still no evidence of a community transmission.

The Director General of Health Leausa Dr Take Naseri has also assured that the team of healthcare frontliners offering care for the isolated passengers at Motootua National Hospital have been in isolation since Wednesday, and have not gone home to their families since they were assigned to Samoa’s positive cases.

Shops, banks, pharmacies, petrol stations, EPC cashpower agents and money transfers will open Tuesday and again on Thursday, from 8am to 2pm under special conditions. Children under 12 are not permitted and everyone must show proof of vaccination.

Of Samoa’s eligible adult population, latest figures shows 96% have received first doses of the AstraZeneca vaccine while 86% are fully vaccinated.

Vaccination centres will also be open for those who have not yet received their second dose, in an effort to close the gap between first doses and those fully vaccinated.

The latest NEOC press conference can be watched here.