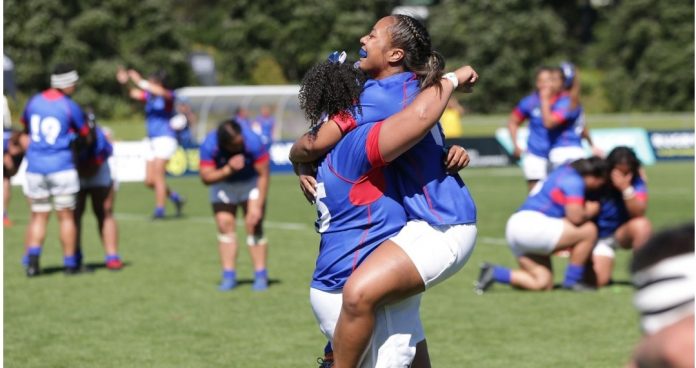 Manusina maintained their impressive record against their Pacific Island neighbours, and booked a place at the Final Qualification Tournament for RWC 2021 with a 40-0 win in Auckland.

Samoa booked their place in the Final Qualification Tournament for Rugby World Cup 2021 with a 40-0 defeat of Tonga at the Trusts Arena in Auckland.

Manusina winger Tori Iosefo scored two of her side’s six tries, while full-back Makayla Eli added 10 points with the boot to ensure that Samoa remain in the hunt for a place at New Zealand 2021.

“Thank you to our families in Samoa, everyone for their prayers,” Samoa captain Masuisui Pauaraisa said.

“We’ve only been together for a week and it’s amazing, the girls have improved and improved every single training. We trusted our game plan, we’re going through!”

The teams had been scheduled to meet in Apia in April, but the outbreak of the COVID-19 pandemic ensured that the match had to be postponed.

Manusina had won the previous meeting between the teams 68-7 two years ago, and they took the lead in the ninth minute on Saturday as Eli struck a penalty through the posts.

The full-back was involved again seven minutes later as number eight Nina Foaese and replacement scrum-half Jhana Magale combined for a set-piece move that ended with Iosefo dotting down in the right corner.

Eli missed the conversion, but a penalty soon after stretched the Samoa lead to 11 points.

Manusina were well on top by now, and a flowing team move gave them a second try in the 28th minute.

Hooker Margaret Vaiouga was brought down within metres of the line, but her front-row colleague Marilyn Live picked up from the ruck and burrowed over to score. Eli added the conversion to make the score 18-0.

Samoa stretched their advantage even further before half-time as Iosefo notched her second try of the afternoon. The right wing brushed off her opposite number, Taina Halasima, as she powered over in the right corner once again.

Tonga began the second half determined to make a dent in their 23-point deficit. But, they were reduced to 14 players in the 51st minute as Nina Hurrell was shown a yellow card for an infringement at the breakdown as Samoa once again closed on their line.

And, it took Manusina less than a minute to make their numerical advantage count as Onjeurlina Leiataua spotted a mismatch in the Tongan defence and arced her run perfectly to score. Eli added her second conversion to give Samoa a 30-0 lead.

Tonga’s task was made even tougher heading into the final quarter as replacement prop Elisha Byrne was sent off for a dangerous tackle following consultation between referee Rebecca Mahoney and TMO Lee Jeffrey.

The decision temporarily gave Samoa a two-player advantage, and they exploited the gaps in the Tongan defence to score a fifth try as Leilani Erwin finished in the right corner.

Tonga ended the match with 13 players as Meleane Fifita was sent to the sin bin. Shortly afterwards, impressive replacement prop Luti Sikoloni found herself in space and powered over from 10 metres to score Samoa’s sixth and final try to confirm a 40-0 victory.

READ MORE: RUGBY WORLD CUP 2021 Draw to be confirmed in Auckland next week >>

Man Hacked with Bushknife Fights for his Life at Motootua Hospital