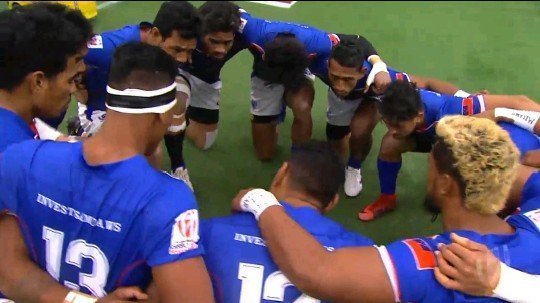 Coming off a solid Day 1 performance to top their pool with Fiji, Manu Samoa were high favourites against France who had finished 15th a week earlier in Las Vegas

Manu 7s found it hard to retain their own ball and the French made them pay by running 5 tries to 2 in a 35-12 thrashing of Samoa.

Samoa then fell out of the Cup Final race to play England for the 5th place semi-final.

England drew first blood at the hands of Norton and Samoa hit back straight away with their human tank, Tofatu Solia crossing over the try line to level the scores.

But England eased in to 5th place of the Vancouver leg with a 33-14 win as England punished the men in blue for poor inside defence.

France went on to beat USA in the semi final to make their first Cup final since 2012. South Africa denied France the cup championship beating an improved French side by 21-12.

It is South Africa’s first win of the season.