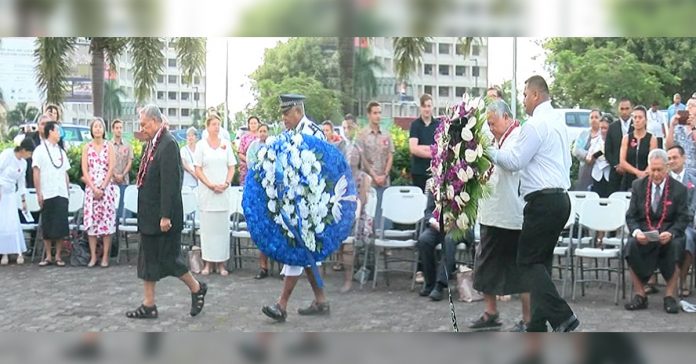 In the early hours of this morning, government officials, returned service men, members of the diplomatic corps and citizens of New Zealand and Australia gathered in the heart of Apia to honour and remember those who sacrificed their lives for our freedom.

The sacrifce of the fallen and returning ANZAC soldiers who served in world wars of the past was remebered and honoured.

The ceremony was held at the Apia Town Clock where wreaths were laid. The first by Head of State His Highness Tuimaleali’ifano Vaaletoa Sualauvi II and Prime Minister, then Prime Minister Tuilaepa Sailele Malielegaoi, followed by members of the diplomatic corps and the public.

Following the dawn ceremony, dignitaries and guests congregated at the Returned Services Association Building (R.S.A.) where formal speeches were given by the President of the R.S.A, Tuala Joe Ponifasio, and the Prime Minister of Samoa.

Tuilaepa paid tribute to the courage of those who sacrificed their lives for the freedom and peace of the people of Samoa.

As President of the R.S.A. Tuala went on to say that when a life is lost in conflict thousands more are spared and peace is once again perferred over war.

“As guardiance of ANZAC in Samoa we vow to continue keeping the spirit of ANZAC alive so generations to come will always remember you.

“We must never forget.”