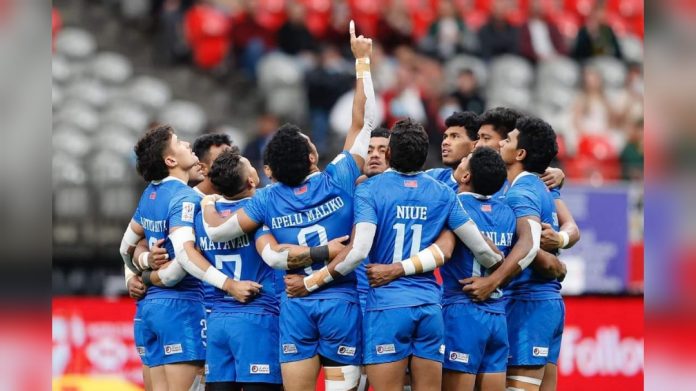 The Manu Samoa 7’s have made it through to the Cup Quarterfinal stages of the HSBC Vancouver leg of the world series, after wins against Wales and Japan and a close loss to New Zealand.

The achievement marks the first time Samoa has managed to achieve back-to-back Cup Quarterfinals in over 6 years. Samoa 7’s made it to 11 Cup Quarterfinals, out of the 34 tournaments under Sir Gordon Tietjens tenure as head coach.

Samoa launched their tournament tries through none other than youngster Steve Rimoni Onosa’i who showed off his fancy footwork and massive strength to score Samoa’s first try of the tournament. Rimoni wasn’t alone, Tepatasi’s Va’afauese Apelu Maliko wanted some of the action too and notched himself a double in that match.

Paul Scanlan also stepped up, and scored a brilliant try of his own by cutting through the Welsh defensive line and beat a desperate defensive chase by Jay Jones to also score a try. Three of the four tries were converted and Samoa secured a win to Wales 26-12 with the Welsh getting in a couple of consolation tries of their own.

With one win under their belts, Samoa needed just one more against Japan to secure a quarterfinal spot. Muliagatele’s boys have proven to be a dangerous force with ball in hand, and once again, they did just that in a one-way match against Japan.

Manu Samoa 7’s starved Japan of possession and it resulted in a 28-5 lead at halftime with tries to Paul Scanlan, Melani Matavao, Uaina Sione and Vaafauese Apelu Maliko.

Samoa came out of halftime and piled on another two tries via Tepatasi duo Va’afauese and Fa’afoi Falaniko.  Japan never gave up and managed to score a couple of tries of their own to bring the final score to 35-10.

New Zealand was the big match up for Samoa. After last week’s loss to the Kiwis in the Cup Quarterfinals, Samoa came out with a force to redeem themselves. But the redemption was off to a rocky start. Just two minutes into the match Paul Scanlan was given a Red Card for contact to head despite their being mitigating factors. Scanlan was already committed to the tackle and the Kiwi player fell into the tackle of Scanlan. The ref went straight for the red card, which could have been a yellow with a later citing if needed.

New Zealand took full advantage of Samoa being down one man for the rest of the match with two quick tries and 10-0 lead.

Samoa however, like they have shown over the last two weeks, just didn’t give up. Even with six men on the paddock their confidence never wavered. Steve Rimoni took things into his own hands when he skimmed veteran Regan Ware in the outside before putting it into 6th gear to bring Samoa within 3 points.

Good teams score right before and right after halftime and that’s exactly what the Kiwis did. All of a sudden the Men in Blue found themselves 17-7 down, with the All Blacks going over the line in the dying seconds before halftime.

But the confidence in this new and improved Samoa 7’s side saw them fighting back to the end. Owen Fetu screamed away with pure speed to score Samoa’s second try and shifted momentum to Samoa.

Va’a Apelu Maliko continued his try scoring antics when he dotted down under the post and Samoa found themselves down by just 24-19. The Kiwis pushed it out to 31-19 late in the match but still Samoa pushed on.

It was Maliko again who took matters into his own hands. He chipped ahead and beat 3 black jerseys to the football and scored to narrow Samoa’s deficit 31-24. There were 15 seconds left on the clock when Maliko went over, and Muliagatele would to well to have a word with his side about when to celebrate, and when to focus on getting a quick conversion and another chance for a kick-off before the clock ticks down.