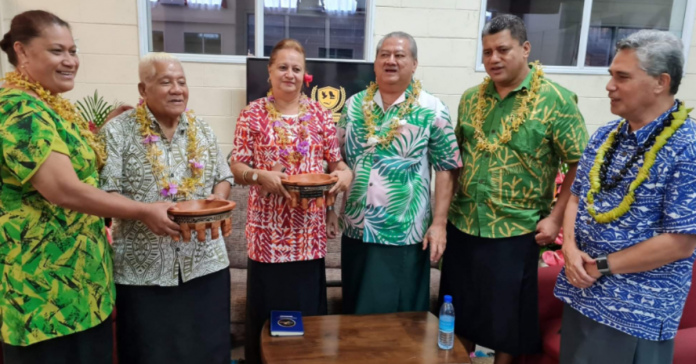 Tears flowed freely with hearts full of appreciation on a beautiful Saturday afternoon at Togafuafua where the men of Apia Harvest Centre Church (AHCC) gathered to fellowship and share about the goodness of God.

The occasion was the Men’s Ministry’s first gathering for 2021 where Senior Pastor Amosa Pouoa highlighted the importance of leadership for fathers and men with an encouragement themed, “The Art of leadership.”

It was based on the book of Titus 2 vs 1 and 2, which reads: “You, however, must teach what is appropriate to sound doctrine. Teach the older men to be temperate, worthy of respect, self-controlled, and sound in faith, in love and in endurance.” Titus 2 is the theme for the Men’s Ministry in 2021.

With the XVI Parliamentary sitting closure and the 2021 General Election around the corner, the Men’s Ministry used the opportunity to acknowledge the leadership and service of two senior church members Fasootauloa Pati Taulapapa and Papalii Niko Lee Hang, both veteran Members of Parliament.

The men have held several Cabinet Ministerial portfolios and have served in Parliament for 20 years each.

A businessman by profession, Fasootauloa, the Member of Parliament for Saleaula, entered Parliament in 1991 as an HRPP member. He served until 2006 before taking a break.He returned in 2016 and served for five more years before announcing his retirement recently.

“I know God has blessed me because when I was growing up I took care of all the elders in my family,” he said.

“I wasn’t very smart and was very poor but I had love in my heart and that’s where it started. I can tell you that I took care of all the elders in my family and they gave me their blessings..

“God blessed me because I took care of them,” shared Faasootauloa.

Papalii on the other hand is an accountant and businessman who had served in various government roles, including being the Public Trustee, for 20 years before he entered Parliament in 2001 as the MP for Individual Voters.

While his constituency has undergone several changes during his tenure, Papalii has maintained the trust of his constituents. The incumbent Minister of Works, Transport and Infrastructure, is contesting next month’s General Election, in what could be his last term.

Faasoo and Papalii shared about their faith in God and how he has been so good to them over the years.

Faasoo shared about his humble beginnings and how he did not have much money or material wealth, except for love.

Papalii testified about the peace of God and how he knew back in 2001 he was called to Parliament. Being a Member of Parliament was not something that he had always wanted to be but when the opportunity opened up, he and his wife, Doris, sought God.

“When we had peace about it, I knew that was God’s timing,” he said. The rest as they say, is history.

For Unasa, he shared his desire to represent his people in Parliament. He admitted that he felt inadequate and he also knows many people have already written him off but he is comforted by the story of King David.

“David was the least qualified of his brothers, he was young and the odds were heavily stacked against him in the eyes of everyone but he trusted God,” Unasa said.

“Whatever the outcome, I will continue to trust God in this journey because I know he knows what is best.”

The gathering was well attended by members of the Men’s Ministry as well as the Pastoral staff and the Board of Trustees, who were invited for the launch.

The President of the Men’s Ministry, Pastor Vui Sebastian Mariner, outlined the Ministry’s plan for this year and their desire to build relationships among men through regular gatherings and fun-filled activities whether it’s within the church walls or elsewhere.

The day started with games, worship, followed by an ava ceremony, sharing and refreshments.

The next fellowship is scheduled for Saturday 17 April 2021.