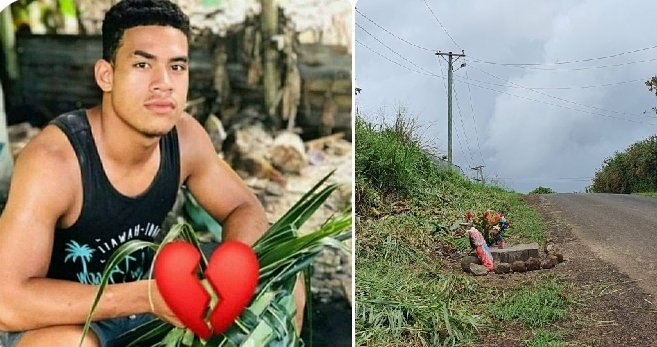 The parents of an NUS Diploma in Tourism student who died on Tuesday night from a suspected hit and run are trying to come to terms with the loss of their boy.

Tuuau Faasavalu would have turned 19 this Saturday 24th of April and his parents, Rosie and Fata Faasavalu, are heartbroken and finding it difficult to cope.

“I’ve lost my appetite and I have not been able to eat since what happened,” says his devastated father.

Tuuau was found dead on the side of the road, just downhill from the Church of Jesus Christ of the Latter Day Saints at Vaitele on Tuesday night.

Deputy Commissioner Auapaau Logoitino Filipo confirmed Police are investigating the incident and believe a vehicle heading up the hill ran over the 18 year old boy.

“Police are still investigating the matter but we can confirm that a hit and run is suspected,” said Auapaau.

Messages of condolences are flooding Facebook about the death of Tuuau Faasavalu, described as a sociable and loving person.

His mother says she forgives the person who may have run over their son and asks Police to release Tuuau for burial.

Rosie shares that her son had come home twice on the night of the incident.

He came first and asked for some money to buy credit. She said she scolded him, but he walked across to their family who live next door and someone there gave him $1 tala for his credit.

“So he took off to the shop, but as always, he was back home at the time of evening prayers,” says Rosie.

Rosie said they had dinner together that night before her son would leave their home for what she did not know.., would be the last time.

Rosie said the incident happened less than an hour after Tuuau left home, at about 11pm on Tuesday night.

A friend he was with that night explained to the grieving parents that the pair had hung out at another friend’s house.

According to this friend, Tuuau told him to go ahead, and he would follow behind after a phone call he was on.

His friend said he wondered what was taking him so long, and came back to find him lying on the roadside.

Tuuau’s father, Fala Faasavalu says he was the disciplinary for their teenage son who was a Mama’s boy.

“He would steer far from me, because he knows I would give him a hiding.. but he would go to his mother for what he wanted..”

Fala said he has never known such pain before and the longest ride of his life was when they rushed to Motootua National Hospital after being told about what had happened.

“I knew my son was gone when I arrived and saw his injuries,” said Fala.

“At the hospital, I couldn’t stop screaming when I saw my son lying there.”

Fala said he only managed to calm down that night when they got to the Police station..

“They tried to explain their investigation, and offered many words of comfort..” said the devastated father.

Fala is finding it hard to forget his son and these past few days have been unbearable for him.

“I go through his school bag.. I go and just stand at places where he would normally be.. I just don’t know how to put this out of my mind..’

Rosie says some family members who live nearby heard what they thought was the sound of a car crash on that night, and a few minutes later people were yelling from the road, including Tuuau’s friends.

Police appeal to the public for any information about the incident at Vaitele on Tuesday 20th April 2020.

If there is a vehicle you suspect was involved, please contact Police immediately.

We pray God’s peace that surpasses understanding cover Tuuau’s grieving parents and family for their loss. May his soul rest in the loving arms of our Lord.