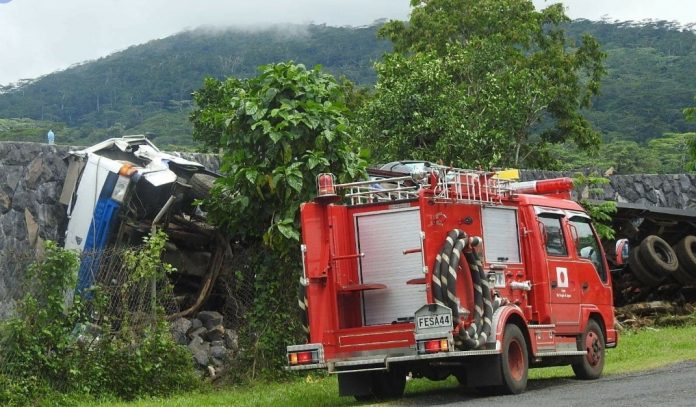 Commissioner of Samoa’s Fire and Emergency Services, Tanuvasa Petone Mauga has confirmed one death following a car accident at Vaoala this afternoon.

Tanuvasa says the accident happened where there is a road bend, opposite the LDS Church at Vaoala.

“The truck with a trailer and excavator was coming downhill…”

Tanuvasa told Samoa Global News the deceased was a young boy on the side of the road.

There were two in the truck but we have lost the bystander ..he was on the side of the road.”

Fire and Emergency Services road rescue team had to cut through the front of the truck, and the door, to get the driver stuck inside.

The driver and passenger are being treated at the Motootua National Hospital.

It is the second fatal accident within 36 hours in Samoa. A man in his late 30’s was killed in a car accident at the steep road in Leulumoega-tuai, in the early hours of Thursday morning.