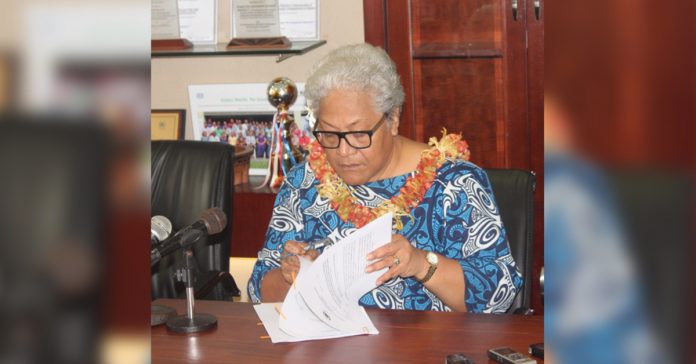 The first document inked by Deputy Prime Minister and Minister of Natural Resources and Environment, Fiame Naomi Mataafa (pictured) is a Memorandum of Agreement (MOA) between the Government of Samoa and the Tiavea Village Council.

Tiavea Village was represented at the signing event by the Tu’ua title Tuiavii and the Village Mayor or Government representative along with high chiefs of the village council committee.

“Their contribution, support and presence as keepers/guardians of the Airport for their “Pule Faamalumalu” is fully acknowledged and recognized,” Deputy Prime Minister Fiame reiterated in a Press Statement.

Also included in today’s signing ceremony was Deed of Settlements (DoS) between the Samoa Government and families whose lands have been used for the Airport Project.

The Press Statement noted that, “Eleven Lots of Land are affected of which three families have completed all the relevant requirements for the confirmation of funds disbursed as payment of their lands taken by Government to build the Inter-island Airport at Tiavea, Aleipata.”

The Deputy Prime Minister also reassured the Tiavea Village that the delay in signing the Outstanding Deeds with the remaining families is due to unsettled issues among the families’ members and not Government.

She noted that these families are still in the process of reaching a final concensus to be presented to Government for endorsement before compensations are paid out.

All payments of compensations approved today for village and families are for the 1st phase of the three phases which the disbursements of funds are allocated into, with 50% on signing the Agreement, 40% on the satisfactory progress of the works and the final 10% on full completion and opening of the Airport.

It is anticipated that the Project should be completed by July/August 2019. 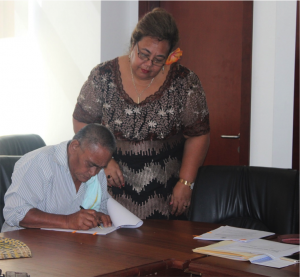 Total cost estimated for the building of the Project is $10M. Land compensation estimated at $4M tala is funded under the Ministry of Finance (MOF).

The agreement with Tiavea is authorized under the Taking of Land Act 1964 which provide for the taking of land for public purposes and for the payment of compensation.