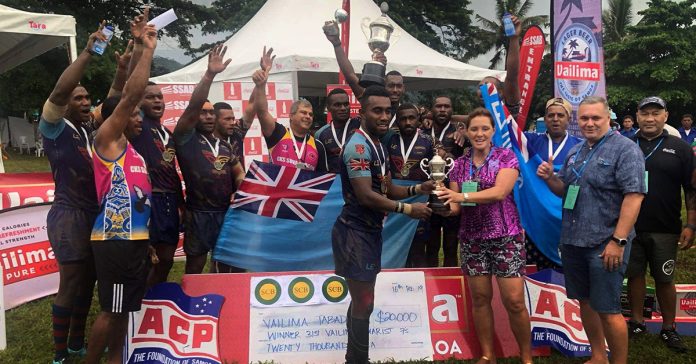 The number one ranked 7s club team in Fiji came into Day 2 with the same dominance and took care of business against a gutsy Lefaga team winning 39-0.

The same could not be said for the semi-final match where the visitors were met with a quality Apia Maroons team led by Silao Nonu. Tabadamu were forced to work until the last minute of the match to beat Maroons in a nail biting 19-12 match.

While most had hoped for a competitive final, Tabadamu were simply just too good leading at half time 12-0 and quickly made it 17-0 at the start of the second half.

Frankie Tamauli Salelologa hit back to bring the game within 12 points but Tabadamu were not phased as they hit instantly reaponded to push their lead to 22-5 with a final score of 22-10.

Frankie Tamauli Salelologa fielded a mixture of experienced players with developing talent who should have attracted the attention of national selectors. Kerisimasi Savaiinaea and Elisapeta Alofipo led the troops from Salelologa into battle and provided an entertaining final for the packed ACP stadium.

World Toilet Day Is No Joke