The Falefa Rugby 7s side has beaten the Aana Chiefs 36-26 in a pool match of the 3rd round of the Vodafone National 7s competition at Apia Park.

The 12th placed Falefa Stormers has caused an upset for the star-studded Aana Chiefs who were finalists in the first leg, and currently 4th in the overall points table.

The top 12 teams were set apart for a Championship round this weekend and Falefa just managed to make the cut, having edged out One Consult Lepa United by one point.

Coach Taito Sione Paulo said they are a humble side focused only on the development of grassroots rugby talent, and winning against more established sides has been a boost to their morale.

“Now that we’re here we can’t relax, we’re gonna grab this opportunity with our two hands, and go from there..”

He took the opportunity to thank their major sponsor Schwartz Construction and the Member of Parliament from their district who have supported the costs of participating in the national competition.

“We wanna thank our major sponsor Schwartz Hunt, they covered the costs of us going to Savaii for the first leg.. and also our Member of Parliament Alaiasa Sepulona for their help”.

Assistant Coach Aitken Chrichton said this is the first time Falefa has fielded a 7s side and their preparation over the past week was focused on empowering the players to believe in themselves.

“We’ve been building up our team and taking lessons learnt after each week of the tournament;

“One of the biggest challenges with our rural players is the mindset, the thinking that they are not as good as the Apia based players, or the international 7s players..

“So this whole week we have been focusing on the mindset.. to make them believe in themselves..

“The win over Marist last week helped us a lot… that really made them believe they could do it”, said Chrichton.

Falefa Stormers are pooled with Isuzu Aana Chiefs and Tepatasi from Aleipata in Pool C.

Falefa lost to Tepatasi 31-12 in their first pool game.

Falefa has now won one,  and lost one, with the fate of Pool C to be determined after the final match between Aana and Tepatasi at 7pm this evening. 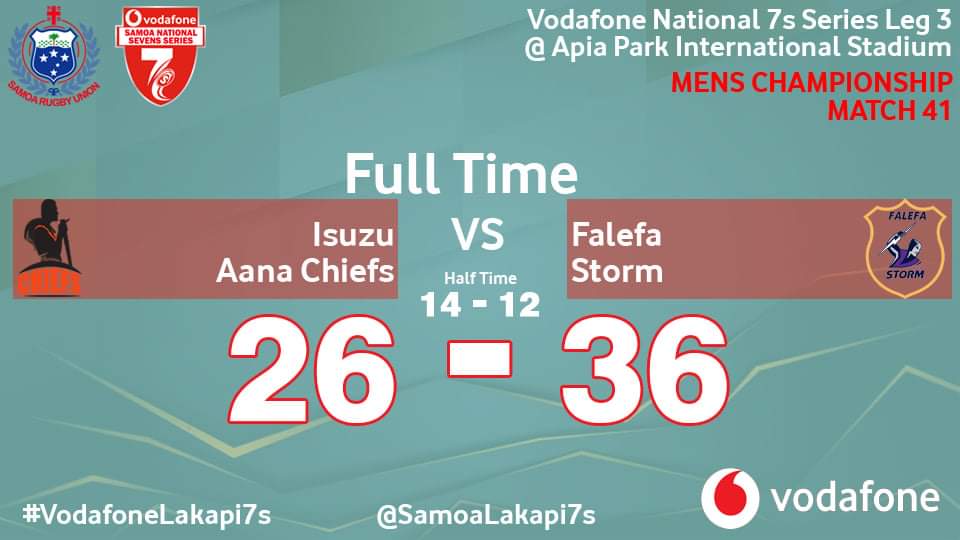