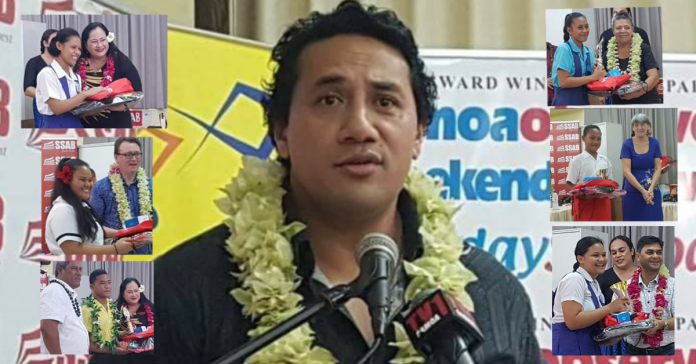 21 August 2020, Apia Samoa. The Samoa Observer Tusitala Short Story competition continues to grow from strength to strength and this year, received 1,315 entries from schools across Upolu and Savaii.

Samoa Observer editor Mataafa Keni Lesa said there were 625 and 690 respective entries for the Samoan and English categories.

“Stories written in Samoan came from 56 different schools, and over 40% of those were from Savaii;

“By contrast the stories written in English came from 61 schools, with 75% of them from Upolu”.

Now in its 9th year, Samoa Observer partnered with Samoa Stationery and Books, Vodafone Samoa and Eveni, and the prize giving ceremony held in the SSAB conference Friday morning was a celebration of student winners from schools across Upolu as well as Savaii.

Over 60 award winners from Years 4 to 13 received prizes including gift vouchers and handsets with student sims.

This year’s competition theme was centered around the COVID-19 pandemic now impacting the world over. Students were asked to write an imaginary story, or one from a real life experience, about the global pandemic.

Winner of the Year 13 English category Tupulua Pelenato of Faatuatua College said she based her story on everyday life during the coronavirus state of emergency lockdown.

“Usually the buses are full and I have to sit on a stranger but the best thing about lockdown was you weren’t allowed to have a full bus.., so I get to have a seat all to myself,” she smiles and says in an interview with Mataafa.

As keynote speaker for the prizegiving event, His Excellency the High Commissioner of Great Britain in Samoa Mr David Ward thanked the Samoa Observer for the initiative and acknowledged all students who submitted entries.

His Excellency highlighted the importance of the annual event, and quoted from the Scottish author who made Samoa his home: the Tusitala, Robert Louis Stevenson..”The difficulty of literature is not to write, but to write what you mean; not to affect your reader, but to affect him precisely as you wish”.

He told students to find themselves, and encouraged them to be unique in their writing.

Notable this year was the overwhelming interest from schools in Savaii. Mataafa highlighted that the increased entries from Savaii has been well reflected in the number of students from Savaii schools amongst the prize winners of this year.

The annual short story competition aims to improve literacy levels throughout schools in Samoa and to encourage all students to write and read in both languages.

“It is also an opportunity to showcase our writers from Samoa to the world, by publishing their work”.

The Year 10 top English story was awarded to Luzaria Tiresa Vaai of St Mary’s College while Taunapo Mohr of Leulumoega Fou College claimed the first prize for the Samoam category.

Mataua Sue of Itu o Tane was the best English story for Year 9 and Jalesofalita Lepule of Pesega College took the Samoan prize.

Ilevet Taupau of Divine Mercy School won the best English story for year 8 and Mahabi Malofou of Lalomalava took the first prize for the Samoan story.

The Year 7 top English story was won by Tausiva Fepulea’i Pita of Vaitele Primary while Bructaness took the Yr 7 Samoan.

The full list of 2020 Short Story Winners includes those who missed out on the top 3, but rated as HC-Highly Commended stories.

Samoa Airways Working to have an Aircraft Ready for when Borders...

Three Samoans Named in NRL’s “Team of the Year”