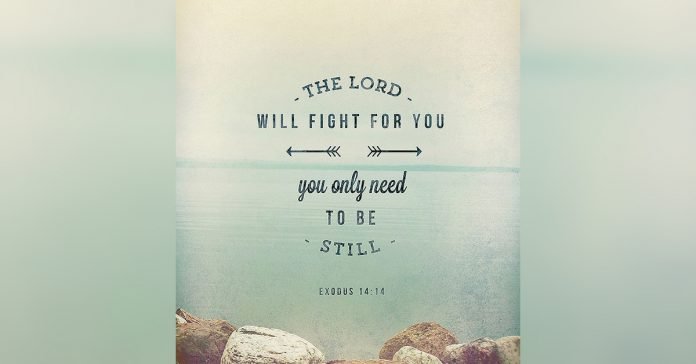 The Lord will fight for you, you only need to be still.

Question: “What does it mean that God will fight our battles?”

Answer: That God will fight our battles means we do not have to anguish, be anxious, or be discouraged when bad things happen in our lives. When it seems a situation is hopeless or the matter at hand is too overwhelming, we may be tempted to doubt God. But Christians must remember that no problem is beyond the scope of God’s sovereign care for His children. He has promised to take care of us (Philippians 4:19), make good plans for us (Jeremiah 29:11), and love us beyond measure (Romans 8:37–39).

In Exodus 14:14 Moses tells the children of Israel, “The LORD will fight for you; you need only to be still.” At that moment, they were standing at the edge of the Red Sea, hemmed in by the sea before them and the Egyptian army behind. The Israelites are in a seemingly impossible situation, but it was a situation brought on by the Lord Himself. It was God who had hardened Pharaoh’s heart to pursue the fleeing slaves (Exodus 14:4, 8). Why would God do such a thing? The Bible gives some of the reasons: because God wanted to make it crystal clear to Egypt that He is LORD so that He got the glory over Pharaoh (Exodus 14:4). And because God wanted to teach Israel that He is their Deliverer (Exodus 6:6) and their Salvation (Exodus 14:13). They were incapable of escaping the situation on their own—they needed only to wait for God to move on their behalf (cf. Psalm 27:14). The battle that appeared to be between the Egyptians and the Israelites was in reality between the Egyptians and the Lord (Exodus 14:4).

The lessons believers can learn from the Exodus account can be powerful and life-changing. When Christians trust God to fight their battles, it enables them to circumvent what often accompanies conflict, i.e., panic, fear, and hopelessness (Exodus 14:11–12). There are times when we can see absolutely no way around a problem, just like Israel when they were cornered. It’s quite probable not one of the Israelites ever imagined that the massive sea was going to split down the middle, providing their way of escape. When Christians believe God’s Word (2 Chronicles 20:17), they learn that no battle is too formidable or monumental for God to handle (Joshua 1:5).

Moses gives a review of some of Israel’s history in Deuteronomy 1. In his recap he reminds them of the importance of having courage and trusting God at the edge of the Promised Land. Forty years earlier, the Israelites had spied out the land and concluded that they were unable to go up against the Canaanites, who were too big and too strong (Numbers 13:31—33). Due to that generation’s lack of faith, they were not allowed to enter the Promised Land. Moses tells the new generation to avoid their fathers’ lack of trust: “Do not be terrified; do not be afraid of them. The Lord your God, who is going before you, will fight for you, as he did for you in Egypt, before your very eyes” (Deuteronomy 1:29–30). As God’s people obeyed in faith, they would find triumph at every turn. “Victory rests with the LORD” (Proverbs 21:31).

Israel, like many Christians today, had forgotten the previous battles God had fought for them all along the way (see Deuteronomy 2:7). The Israelite spies had seen “giants” in the land (Numbers 13:33, NKJV), just like Christians today see “giant” obstacles, complications, and problems that seem too large to conquer. To let the “giants” steal our faith only leaves defeat and a lack of assurance in the God who is in control of every problem, in spite of its size (Romans 8:28).

God is in control, but that does not mean Christians get to avoid the battles—in fact, the Bible states the opposite (2 Timothy 3:12). “Suffering produces endurance, and endurance produces character, and character produces hope” (Romans 5:3–4). In order for a believer to live a life of endurance, character, and hope, we must put on our armor (Ephesians 6:10–17) and trust the Deliverer. We “put no confidence in the flesh” (Philippians 3:3). Our confidence is in God, who will fight our battles and bring us safely home (Jude 1:24–25). “Some trust in chariots and some in horses, but we trust in the name of the LORD our God” (Psalm 20:7).

Dear Lord, Bless Samoa today, in the name of Jesus.