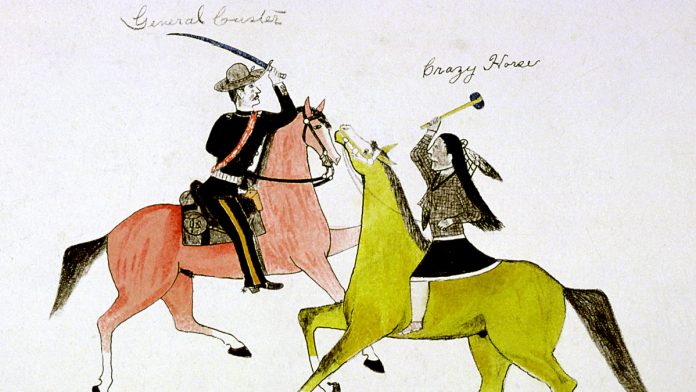 On this day in 1877, Crazy Horse and his warriors–outnumbered, low on ammunition and forced to use outdated weapons to defend themselves–fight their final losing battle against the U.S. Cavalry in Montana.

Six months earlier, in the Battle of Little Bighorn, Crazy Horse and his ally, Chief Sitting Bull, led their combined forces of Sioux and Cheyenne to a stunning victory over Lieutenant Colonel George Custer (1839-76) and his men. The Indians were resisting the U.S. government’s efforts to force them back to their reservations. After Custer and over 200 of his soldiers were killed in the conflict, later dubbed “Custer’s Last Stand,” the American public wanted revenge. As a result, the U.S. Army launched a winter campaign in 1876-77, led by General Nelson Miles (1839-1925), against the remaining hostile Indians on the Northern Plains.

Combining military force with diplomatic overtures, Nelson convinced many Indians to surrender and return to their reservations. Much to Nelson’s frustration, though, Sitting Bull refused to give in and fled across the border to Canada, where he and his people remained for four years before finally returning to the U.S. to surrender in 1881. Sitting Bull died in 1890. Meanwhile, Crazy Horse and his band also refused to surrender, even though they were suffering from illness and starvation.

On January 8, 1877, General Miles found Crazy Horse’s camp along Montana’s Tongue River. U.S. soldiers opened fire with their big wagon-mounted guns, driving the Indians from their warm tents out into a raging blizzard. Crazy Horse and his warriors managed to regroup on a ridge and return fire, but most of their ammunition was gone, and they were reduced to fighting with bows and arrows. They managed to hold off the soldiers long enough for the women and children to escape under cover of the blinding blizzard before they turned to follow them.

Though he had escaped decisive defeat, Crazy Horse realized that Miles and his well-equipped cavalry troops would eventually hunt down and destroy his cold, hungry followers. On May 6, 1877, Crazy Horse led approximately 1,100 Indians to the Red Cloud reservation near Nebraska’s Fort Robinson and surrendered. Five months later, a guard fatally stabbed him after he allegedly resisted imprisonment by Indian policemen.

In 1948, American sculptor Korczak Ziolkowski began work on the Crazy Horse Memorial, a massive monument carved into a mountain in South Dakota. Still a work in progress, the monument will stand 641 feet high and 563 feet long when completed.