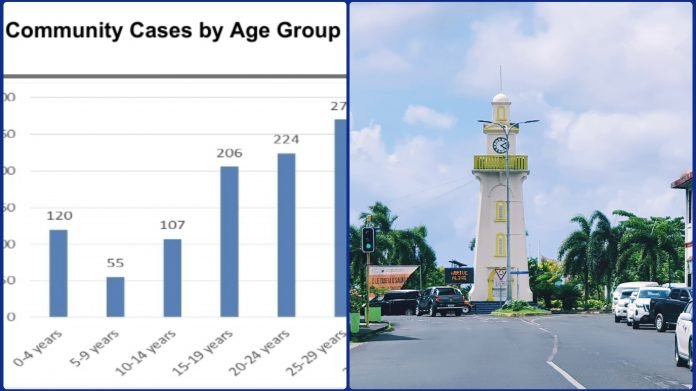 There are still no community cases recorded for the islands of Manono and Apolima. Samoa has recorded one death, and no cases have been admitted to the ICU since the outbreak. The number of cases needing to be isolated at the Motootua National Hospital special ward has been minimal also, with currently six reported there today.

As has been the case since the beginning of the outbreak, community cases by Age Group is significantly higher amongst those aged 15 to 35, however, as case numbers grow, the 35 to 55 age group brackets are increasing at a faster rate, and the positivity rates of infection amongst the older population as well as babies, are higher.

On the other end of the scale, there have been an additional 25 new cases of elderly over the age of 60 years – from 140 yesterday to 165 today.

The overall total of 20,643 RATs reported to have been administered by the Ministry to date suggests an infection rate of 10%. That rate was 9% yesterday and 8% the day before.

According to information from the Ministry of Health, 96.7 percent of Samoa’s eligible population has received their first dose, 69.3 percent have received their second dose. That number is lower when averaged out to take into consideration the younger group of 5-11 not yet eligible for their second shots.

When looked at for specific age groups, adults over 18 are 90% double vaxxed, and the percentage for children 12 – 17 years who have received their first and second doses is also over 90.

There are 23,163 people of aged 18 years and over recorded have received their booster shots with that number expected to be significantly higher following the mass vaccination program currently taking place.