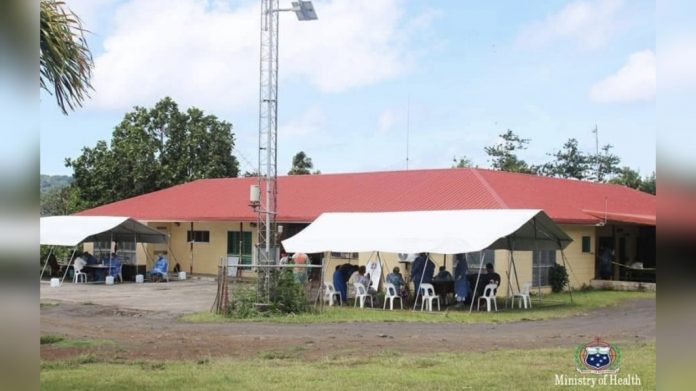 According to the Ministry’s statement, “The deceased, a 67-year-old male, had multiple comorbidities. He died shortly after he was admitted to the Lalomanu District Hospital yesterday,” reads the official statement.

“Out of respect for the family we will not be making any further comment,” concludes the MOH statement.

However, speaking to Samoa Global News, the older brother of the deceased said his younger sibling was sent home twice before he passed away at Lalomanu District Hospital.

According to 71-year-old Noa Autasia, his brother who was 69, was originally taken to Lufilufi District Hospital, where he tested positive for covid-19, and then sent home to self-isolate.

Noa said his brother’s condition did not improve, so they took him back to Lufilufi District Hospital, where he was again returned home, and told not to worry.

“He was suffering (tigaina) so we took him back to the hospital, but the doctor said it was just asthma, and not to worry, because the covid had passed”.

According to Noa, his brother’s condition did not improve, so they took him to Lalomanu District Hospital. At Lalomanu, said Noa, they were told his brother was covid-positive. Noa said this confused him, because Lufilufi District Hospital had told them the covid had passed.

As confirmed by the MOH statement, Samoa’s first covid-related death, passed away shortly after being admitted to Lalomanu on Wednesday. The Ministry’s statement adding the deceased had “multiple comorbidities” or multiple chronic conditions.

According to Noa Autasia, his brother looked to have had asthma (o le sela lava na tigaina ai). He said his brother’s body was taken to Motootua National Hospital, where it was confirmed he was covid-positive.

He said both he and his brother have large families, and they are now concerned that as close contacts, the whole family are now covid-positive.

“We are a very big family, my brother and I both have a lot of kids. This means that we should all now be tested.”

Last Sunday an elderly man from Siumu, Mano Tupuola Sekono Fetoai was treated outside the security hut of Poutasi District Hospital, after being told he could not enter because he had tested positive for covid-19. According to a nurse at Poutasi hospital, it is protocol that covid-19 positive patients cannot enter the hospital premises.

Since the global pandemic outbreak, it has been widely reported that the elderly face the highest risk for deaths from covid-19.

According to a WHO report, “Although all age groups are at risk of contracting COVID-19, older people face significant risk of developing severe illness if they contract the disease due to physiological changes that come with ageing and potential underlying health conditions”.

Samoa’s latest report shows that 126 community cases are aged 60 years and above.

As of 2pm Wednesday, there were 1,353 active cases in Samoa with 1,665 total community cases detected so far.