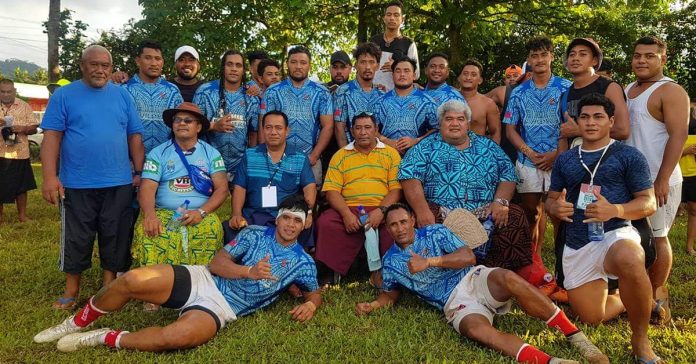 15 February 2019, Apia Samoa.  Day 1 has seen the elimination of 3 top seeded sides at the 31st Vailima Marist International Sevens and the rise of rural based teams from Lefaga and Satalo.

The three year reign of Auckland Marist came to an end after losing 38-12 to an unstoppable Tabadamu Fiji who were on a level of their own in Pool 1. Defending champions Taula Auckland Marist that featured two Manu Samoa Sevens players, Meilani Matavao and Iakopo Scanlan will now advance to the Bowl Quarters against Samoa United.

The second unexpected result of the day was the defeat of top seeded SCOPA by a young under-rated Lefaga side coached by Rev Onosai Soo and legendary Lucky Uaea Apelu. SCOPA then beat Samoa United from Christchurch but a points differential count back put SCOPA in 3rd place.

Lefaga will advance to the Cup quarter finals on Day 2 but faces Tabadamu from Fiji.
Hosts of the tournament Marist St Joseph’s Sports Club were eliminated after finishing 3rd in their pool behind a dangerous looking Safata side and Mountford Brothers from South Auckland.
Another exciting match which drew the crowds to the ACP Stadium at Lotopa was the clash between the brothers of Vaiala and Moataa but Vaiala proved too good for Moataa winning 17-0.
In the women’s division the Christchurch Women’s team dominated Pool 1 and were undefeated, while Taga Women’s team finished top of Pool 2 also undefeated.
Day 2 promises a great day of rugby as teams who have advanced battle for the Tupua Fred Wetzell Trophy and 20k tala prize money.