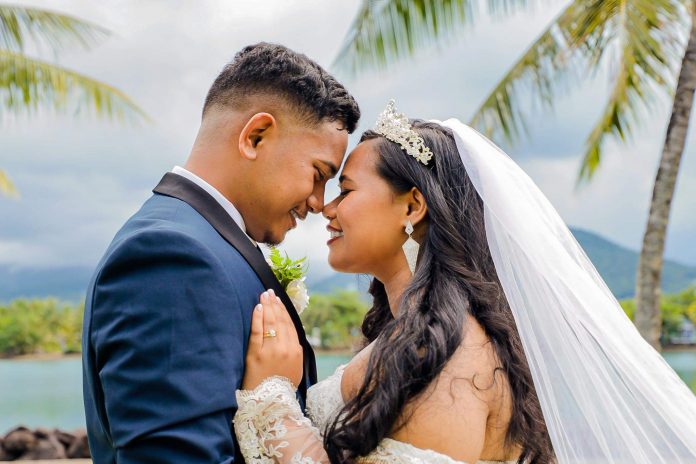 High school sweethearts Timothy Luamanuvae and Elisha Aiafi were brought together as one in the sanctity of holy matrimony by Pastor Samoa Unoi of Peace Chapel Church, Apia, on Friday 7th January 2022.

It had been a 10 year friendship that started in 2011 when Timothy asked Elisha to be his girlfriend, way back when they were just kids in Year 8.

But this love story can be taken back even further, to when the two lovebirds, who are today focused adults with undergraduate degrees, were 7 year olds in Year 3.

“I so remember the first day I ever saw Elisha,” recalls Timothy. “She had just joined our class in Year 3 and was asked to stand up and introduce herself.. She had two pigtails, the cutest smile… that same one right there.. and the biggest lunch box I’d ever seen!” they both laugh and affectionately brush each other’s hands away.

Of course Elisha says she has no recollection of this and insists she didn’t talk much to Timothy back then because he liked to make fun of kids.

“He was sort of the class bully..” they both look at each other again, and laugh.

“I was shocked when he started talking to me in Year 8 coz he never talked to anyone,” recalls Elisha. “That year we became close friends, and towards the end of the year he was texting me a lot..”

“I had a phone so that my parents could always get a hold of me.. Tim got the number and started texting,” they smile as they reminisce..

“It wasn’t until the end-of-year class party when he asked me to be his girlfriend… and the rest is history..”

They forget I’m even there as they look into each other’s eyes again.

“But yes,” Elisha snaps out of the gaze… “We’ve come a long way from him using his mom’s phone to secretly text me, to now being able to spend the rest of our lives together..”

Sitting with this beautiful young couple, hearing their love story is infectious with the euphoria of young love having the effect of lifting ones spirits. But there is one very distinct difference that emanates from both of them that has an even stronger pull than just young love. And that is their faith in God, who has been firmly placed at the centre of their relationship.

“I believe the reason we have been together for so long is we always make time to pray together,” Elisha shares.

“And when we were apart for three years, we always made sure we prayed before the end of the day… We would pray together on messenger,” said Elisha.

“We would take turns praying and if one of us was sick or had a rough day, then the other one would pray again,” Timothy adds.

The next journey after high school and graduating from the NUS University Prepatory Year (UPY) in 2016 was to attain bachelor’s degrees. A pre-requisite of their continued relationship firmly put down by both sets of parents.

They both share that those were three challenging years of doing the long distance relationship thing.

“Our faith got us through because we just always knew in our hearts that this was a love story written by God,” says Timothy who is a staunch member of the Congregational Christian Church of Samoa (EFKS) at Laulii village.

In the meantime Timothy had also been bestowed the matai title of Vaipou by his family.

Elisha describes her husband as “Laulii hard who even plays for the village rugby team”.  Vaipou is an active member of Laulii’s village youth activities and his aufaipese – the church choir – is dear to his heart.

“He’s been playing piano with EFKS Laulii since 2012 when he was in Year 9 and I go to Peace Chapel, so our church experiences are quite different,” says Elisha.

Vaipou adds, “But we know we serve one God and it doesn’t matter which denomination we serve Him from..”

Elisha jumps in and adds, “As soon as he woke up on Saturday morning the first thing he asked was, would I come to pese with him”.

Elisha says Timothy has been asking her to come to church choir practice with him all these years, but it was an activity she felt she could only attend after marriage.

“Fiu e fai mai ae ou fai iai, seiloga lava ka ke gogofo,” 😅 “Oh dear,” she laughs, “so yes, we’re most likely going to have a matafale at Laulii and I will definitely start to support him with all his church duties.”

Timothy and Elisha Luamanuvae obeyed their parents’ wishes which was also aligned to their own personal goals – and attained bachelor’s degrees in 2019 and 2020 respectively.

Relevant to their degrees the young graduates both entered the workforce with Samoa’s Ministry of Finance. They laughed at their journey of even ending up at their first workplace together.

“But when we decided to get married we knew one of us had to leave so I applied and got a job with MCIL,” Elisha shares.

At Peace Chapel Church Pastor Samoa Unoi makes couples write write own wedding vows. We asked Vaipou and Elisha to share their wedding vows with us..

God Bless your unity as you continue to follow Him in your journey together.