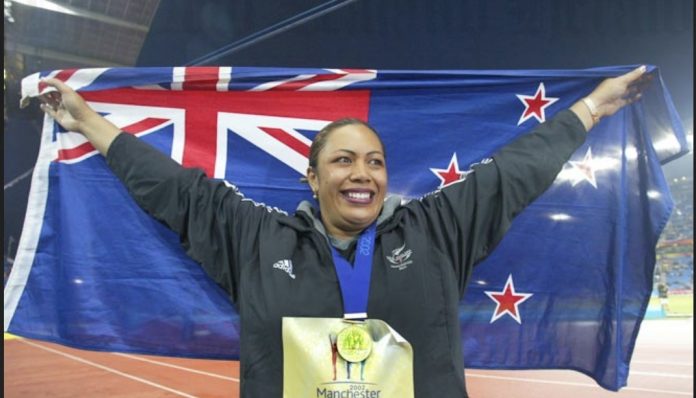 Beatrice Faumuina made history on August 7th, 1997, when the 22-year-old became the first New Zealander to win gold at the athletics world championships.

The win had far-reaching consequences, influencing generations of Kiwi throwers, said New Zealand throws coach Debbie Strange, who was there at the time.

Faumuina threw the discus 66.82m, which was 92cm further than her closest rival, Ellina Zvereva of Belarus, at Athens.

Faumuina’s victory that historical day was the pinnacle of a career which also featured two gold medals (1998, 2002) and a silver (1994) at the Commonwealth Games, and wins at a World Cup athletics meeting (2002) and an Oceania Championship (2010).

Faumuina’s longest throw of 68.52m a month before her World Championships victory ensured that she was ranked as World No. 1 for 1997 by the authoritative Track and Field News. She made the top 10 in six of the next eight years.

An Aucklander of Samoan descent, Beatrice Faumuina was honoured with a Samoan stamp after her 2002 Commonwealth Games victory at Manchester.

She was made an Officer of the New Zealand Order of Merit in 2005 for services to athletics. More recently she has been a Goodwill Ambassador for the United Nations’ Food and Agriculture Organization, a presenter for the TVNZ current events show Tagata Pasifika, a contestant on Dancing with the stars, and CEO of the BEST Pasifika Leadership Academy and Charitable Foundation.

The only other New Zealand medallist at a World Championships, which were first held in 1983 and now take place in odd-numbered years, has been shot-putter Valerie Adams, whose surprise third place in 2005 signalled her arrival among the élite of the discipline.