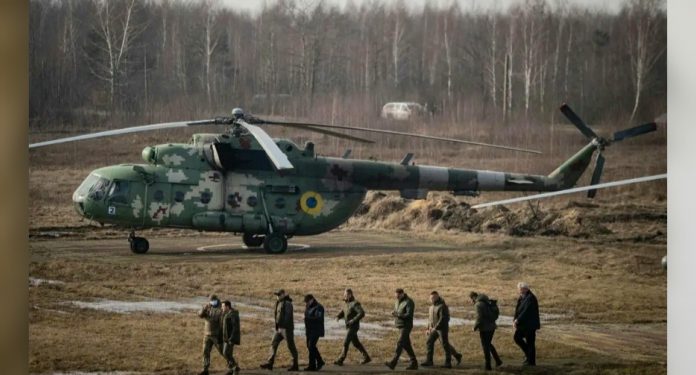 KYIV, Ukraine — He appeared on Ukrainian television early on Thursday morning, as the threat of war was pressing down. First, President Volodymyr Zelensky of Ukraine addressed the 44 million citizens of Ukraine. Then he turned to the 144 million Russians living next door and beseeched them to prevent an attack that evoked the darkest eras in Europe since World War II.

“Listen to the voice of reason,” Mr. Zelensky  said after midnight Thursday in Kyiv. “The Ukrainian people want peace.”

It was an impassioned bid to save his country — and it did not work. Hours later, a full-scale Russian invasion had begun and Mr. Zelensky, a former television actor and comic, had become a wartime leader. And for the moment, as the Russian attack is continuing, Ukrainians have rallied around him.

His dramatic speech as well as his appearance at the Munich Security Conference last weekend, where he warned European allies about “appeasement” of Russia, have given Mr. Zelensky something that even his allies would not normally ascribe to him — gravitas.

He will now face the greatest crisis in his country’s modern history, even as he must face off against President Vladimir V. Putin of Russia.

“Putin began a war against Ukraine, and against the entire democratic world,” Mr. Zelensky said in a second national address on Thursday, after Russian soldiers hit targets in 16 cities across the country, including the capital, Kyiv. “He wants to destroy our country, and everything we have been building. Butwe know the strength of the Ukrainian people.”

“You are indomitable,” he added. “You are Ukrainians.”

It of course remains deeply uncertain how long, or even if, Ukrainians can indeed hold out against a vastly bigger and superior Russian force, or whether Mr. Zelensky will continue to step up into a role for which he’s had no rehearsal. Public opinion could yet turn sharply against him, as it did in mid-February as the threat of war grew. And a more serious danger is lurking: possible assassination — a prospect even Mr. Zelensky’s office raised on Thursday as the Russian forces were closing in on Kyiv.

Maria Zolkina, a Ukrainian political analyst who works at the Democratic Initiatives Foundation, said Mr. Zelensky “didn’t choose to fight, and he is not a president of a wartime. But since yesterday, when it became clear from his intelligence what shape the attack would take, he is acting exactly how a president should act in the wartime regime.”

Mr. Zelensky came to power as a corruption fighter, confident at the time of his ability to broker a peace to the long-simmering conflict with Russian-backed separatists then confined to the country’s east. He won in a landslide, with 73 percent of Ukrainians backing him over the incumbent president, Petro Poroshenko, a wealthy businessman who had taken a hard stance against Moscow.

Mr. Zelensky had no prior experience in politics besides playing a president on television. He won on a populist agenda by targeting a wealthy class of oligarchs and promised to be a pragmatic president whose vision for Ukraine was a country that was neither “a corrupt partner of the West” nor “Russia’s little sister.” His strongest support came from southern and eastern Ukraine, including in the conflict-ridden Donetsk and Luhansk regions, part of which are subsumed by two separatist enclaves whose independence Mr. Putin recognized on Monday.

Since then, doubts have lingered about his preparedness to navigate Ukraine through such perilous straits and the expertise of the advisers he has surrounded himself with, many drawn from his comedy studio, Kvartal 95. While his defense and military people are well respected, and he has slowly built a meritocratic team, many of those around him arrived with little experience in governing, let alone diplomacy or war.

Since Russia’s invasion, they are on the front lines. And Mr. Zelensky, in his last-ditch appeal to head off war, seized that moment and all its drama in a way few expected, giving a people under siege a much-needed rallying point.

When he appealed directly to the Russian people, switching languages to Russian as he did so, he referred to them as neighbors and family, even as he acknowledged differences and admitted that they would probably never even hear his words, given the Kremlin’s tight grip on Russia’s news media.

He tried to address the main accusations leveled against Ukrainians by the Kremlin. Ukrainians were not Nazis, said Mr. Zelensky, who is Jewish, and whose own grandfather had served in the Soviet Army throughout the war. They did not hate Russian culture, he said.

“We are different,” he said, “but that is not a reason to be enemies. We want to determine, build our future ourselves, peacefully, calmly and honestly.”

Ukraine’s Parliament declared a state of military emergency, and the government announced it would give arms to anyone with combat experience who was ready to defend the country and urged people to donate blood for wounded veterans.

“The future of our Ukrainian people depends on every citizen,” Mr. Zelensky said on Thursday.

“The enemy has suffered heavy losses,” he added. “The losses of the enemy will be even greater. They came to our land. Ukraine is under attack from the north, east and south. Attacked from the air. Protection works. Today, the army and national solidarity are the mainstay of Ukrainian statehood.” It was a hopeful statement considering how much Russian firepower his soldiers are up against.

Mr. Zelensky’s path mirrors that of his country, which has been at war with Russia-backed separatists for eight years. The past decade has seen Ukrainian national pride and use of the Ukrainian language dramatically rise, in tandem with trust in democracy and a pro-Western orientation. Trust in Russia, and respect for Mr. Putin’s authoritarian government, has dwindled.

“He made a transformation because basically, Ukrainian society made this transformation,” said Volodymyr Yermolenko, a philosopher who edits Ukraine World magazine.

The president was “a person from eastern Ukraine, a Russian speaker, who made his business in Russian,” he said, referring to Mr. Zelensky’s television channel, Kvartal 95. “Russians would have expected pro-Russian policies on his part, but he understands that Russians want to make everything on their terms and push Ukraine around, and deny Ukraine’s existence. Of course he gradually became a typical Ukrainian patriot.”

And Ukrainians have rallied around Mr. Zelensky, even if his initial attempts to downplay. President Biden’s bleak prognosis about full-scale Russian invasion caused consternation and cost the country crucial time to prepare.

“Ukrainians are uniting, we have one president,” said Daria Kaleniuk, the head of Ukraine’s Anticorruption Action Center, an influential research institute.
Understand Russia’s Attack on Ukraine

What is at the root of this invasion? Russia considers Ukraine within its natural sphere of influence , and it has grown unnerved at Ukraine’s closeness with the West and the prospect that the country might join NATO or the European Union. While Ukraine is part of neither, it receives financial and military aid from the United States and Europe.

Are these tensions just starting now? Antagonism between the two nations has been simmering since 2014, when the Russian military crossed into Ukrainian territory, after an uprising in Ukraine replaced their Russia-friendly president with a pro-Western government. Then, Russia annexed Crimea and inspired a separatist movement in the east. A cease-fire was negotiated in 2015 but fighting has continued.

How did this invasion unfold? After amassing a military presence near the Ukrainian border for months, on Feb. 21, President Vladimir V. Putin of Russia signed decrees recognizing two pro-Russian breakaway regions  in eastern Ukraine. On Feb. 23, he declared the start of a special military operation in Ukraine. Several attacks on cities around the country have since unfolded.

What has Mr. Putin said about the attacks? Mr. Putin said he was acting after receiving a plea for assistance from the leaders of the Russian-backed separatist territories of Donetsk and Luhansk, citing the false accusation that Ukrainian forces had been carrying out ethnic cleansing there and arguing that the very idea of Ukrainian statehood was a fiction.

How has Ukraine responded? On Feb. 23, Ukraine declared a 30-day state of emergency cyber attacks knocked out government institutions. Following the beginning of the attacks, Volodymyr Zelensky, Ukraine’s president, decated martial law. The foreign minister called the attacks “a full-scale invasion” and called on the world to “stop Putin.”

How has the rest of the world reacted? The United States, the European Union and others have condemned Russia’s aggression and begun issuing economic sanctions against Russia. Germany announced on Feb. 23 that it would halt certification of gas pipeline linking it with Russia. China refused to call the attack an “invasion,” but did call for dialogue.

How could this affect the economy? Russia controls vast global resources — natural gas, oil, wheat, palladium and nickel in particular — so the conflict could have far-reaching consequences, prompting spikes in energy and food prices and spooking investors. Global banks are also bracing for the effects of sactions.

“He is the commander in chief, and the Ukrainian army is following his instructions. Now we are supporting him, he is leading the country in war, disregarding any criticism of how it could have been handled better. His role is critically important now.”

The unity is notable in a Ukraine that has been marked by fractious politics.

Even Mr. Zelensky’s predecessor, Mr. Poroshenko — whom Mr. Zelensky’s government wanted to arrest on charges of treasons and supporting terrorism that many dismissed as politically motivated — stood behind him.

“I want everyone to see that Kyiv demonstrates responsible behavior,” he wrote on Facebook.

There were some who want Mr. Zelensky to make peace at any price.

“I want our president to wave a white flag, I want us to give up as long as there is no war,” said Oksana Zymunova, a 23-year-old shop assistant searching frantically for a train ticket at Kyiv’s central station. “Just no war. I understand he is scared that people will not accept it,” she said, referring to Mr. Zelensky, “but he has to raise a white flag.”

Ms. Zymunova, dressed in bright pink track pants and carrying her two cats in containers, was cursing the lack of availability of any tickets.

But most Ukrainians have stood firm.

“People are staying here to risk their lives because this country is more than just territory,” said Fedir Serdiuk, 26, who runs a first-aid training business.

“This has united people,” he maintained, adding that as tensions escalated, “people were buying ammunition rather than plane tickets.”

But Ms. Kaleniuk feared Mr. Zelensky had been left alone by Western allies who had not imposed strong enough sanctions on Mr. Putin and his enablers.

“What’s happening now is similar to what happened in 1939,” said Ms. Kaleniuk, referring to the invasion of Poland by Nazi Germany.

“Nobody believed Germany would invade a European country. And no one believed Putin, the new Hitler of our time, would invade a peaceful nation. The first civilians have already been killed, and there will be more suffering. We have been alerting our Western partners that you have to be tough with Russia — don’t do appeasement with them. It is an invitation for more violence.”