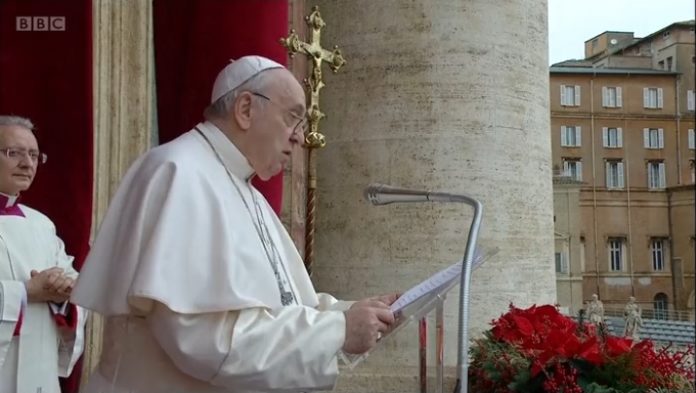 Pope Francis has urged the world not to be indifferent to conflicts and tragedies but instead continue working for peace.

Pope Francis gave his traditional Christmas message followed by his “Urbi et Orbi” blessing (to the city and the world) to crowds of pilgrims gathered in a rainy Saint Peter’s Square and to the world via a broadcast and streaming spanning the globe.

In his annual Christmas Day message, the pontiff pointed to ongoing turmoil in Syria, Yemen and Iraq, as well as in areas of Africa, Europe and Asia.

He also said the effects of the pandemic threatened efforts to resolve conflicts on an international level.

He spoke outdoors again this year after making his speech indoors last year.

He said the challenges of the pandemic could make people want to withdraw from engaging with others, but he praised those who had instead kept families and communities together.

“Our capacity for social relationships is sorely tried; there is a growing tendency to withdraw, to do it all by ourselves, to stop making an effort to encounter others and do things together,” he said.

“On the international level too, there is the risk of avoiding dialogue, the risk that this complex crisis will lead to taking shortcuts rather than setting out on the longer paths of dialogue.

“Yet only those paths can lead to the resolution of conflicts and to lasting benefits for all.”

The Pope lamented how far the world is from realising peace.

“Indeed, even as the message of the birth of the Saviour, the source of true peace, resounds in our hearts and in the whole world, we continue to witness a great number of conflicts, crises and disagreements,” he said.

“These never seem to end; by now we hardly even notice them. We have become so used to them that immense tragedies are now being passed over in silence; we risk not hearing the cry of pain and distress of so many of our brothers and sisters.”

“Let us listen to the cry of children arising from Yemen, where an enormous tragedy, overlooked by everyone, has silently gone on for years, causing deaths every day,” he said

He also asked people to remember Bethlehem, the birthplace of Jesus, which is “experiencing hardship also from the economic repercussions of the pandemic, preventing pilgrims from visiting the Holy Land and adversely affecting the life of the people”.

He added, “Do not leave us indifferent before the tragic situation of migrants, displaced persons and refugees. Their eyes beg us not to look the other way, ignoring our common humanity, but instead to make their stories our own and to be mindful of their plight.”