(GOVT. PRESS SECRETARIAT); On the heels of the successful Miss Samoa Pageant staged in Savaii two months ago, the 2019 Pacific Games Organising Committee is following suit banking on the outpour of support from the Big Island to deliver one of the best international sporting event to be staged on the Big Island.

Like the Miss Samoa Pageant this year, this will be the first time that Savaii will host the Pacific Games Boxing Competition.

And the decision to do so was no accident, says Games Chief Executive Falefata Hele Matatia.

“It’s about inclusiveness to ensure that Savaii plays a leading role in the Pacific Games,” Falefata told a press conference.

He notes that taking the boxing competition to the Big Island will provide a sense of ownership for Savaii and will do justice to boxing legends from the Big Island who have contributed silently over the years in cementing Samoa’s international profile as a nation of fearless boxing greats.

Then there is the economical factor in exposing the Big Island as a tourism destination and ideal for business investment.

And of course injecting new revenues into the Savaii business community from incoming athletes, officials and supporters as well as spectators.

“For us, we have three principles as our main decision defining whether its costs effective, meets our time frame and sustainable,” added the Games CEO.

“And Savaii hosting the boxing competition meets our requirements and a perfect vehicle to profile the Big Island.”

As of this week, 14 Pacific countries have registered to compete in boxing numbering over 300 athletes and officials not to mention supporters.

A total of 16 compulsory sports will feature on the Samoa 2019 programme, along with a further 10 optional sports. 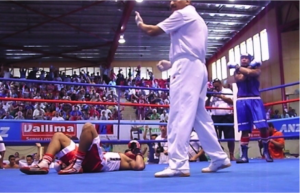 It will mark the return of archery and badminton to the programme, with both sports having been absent from Port Moresby 2015.

Hockey, karate and softball, which were on the programme in 2015, will not feature in Samoa.