Saturday 26 March 2022 Apia Samoa. The limited hours of 8am to 2pm on this particular Saturday is proving to be a panic few hours for people as they rush to supermarkets, line up at money transfers, outside banks and then also try to stand in the queue to be vaccinated.

Long qeues are seen outside money transfers, supermarkets, EPC cash power outlets and petrol stations as crowds of people panic to chase their “To Do” lists before the 2pm curfew.

One mother standing in line for one of the money transfers operators in Apia says she has to withdraw the money before she can shop.

“I’ve been here since 8:30am because we couldn’t leave home until 8. But there were already lots of people in line when we got here. I just hope we can get to the shops in time and then home before 2,” she told SGN.

She says while she is waiting in line, the family car is queued up in Apia for the children’s vaccinations and boosters.

“I haven’t been boosted but the money from my brother for our mother, is coming to my name.”

The Vaitele area is just as packed with crowds outside all the major supermarkets and money transfers outlets as well as petrol stations.

One father outside a long queue in Vaitele said he does not think there will be enough time for him to take his family to the drive-thru vaccination sites. He hasn’t been boosted but says his wife wants to make it to the supermarket as well as the pharmacy today before 2pm.

Samoa’s nationwide lockdown continues to midnight Tuesday 5th April 2022. The next exempt time for shopping is next Tuesday 2nd April also between 8am and 2pm.

Eight drive-thru vaccination sites have been announced this morning for adults’ boosters as well as Pfizer for children 5-11 and 12-17.

Public Notice for Unitholders of UTOS: 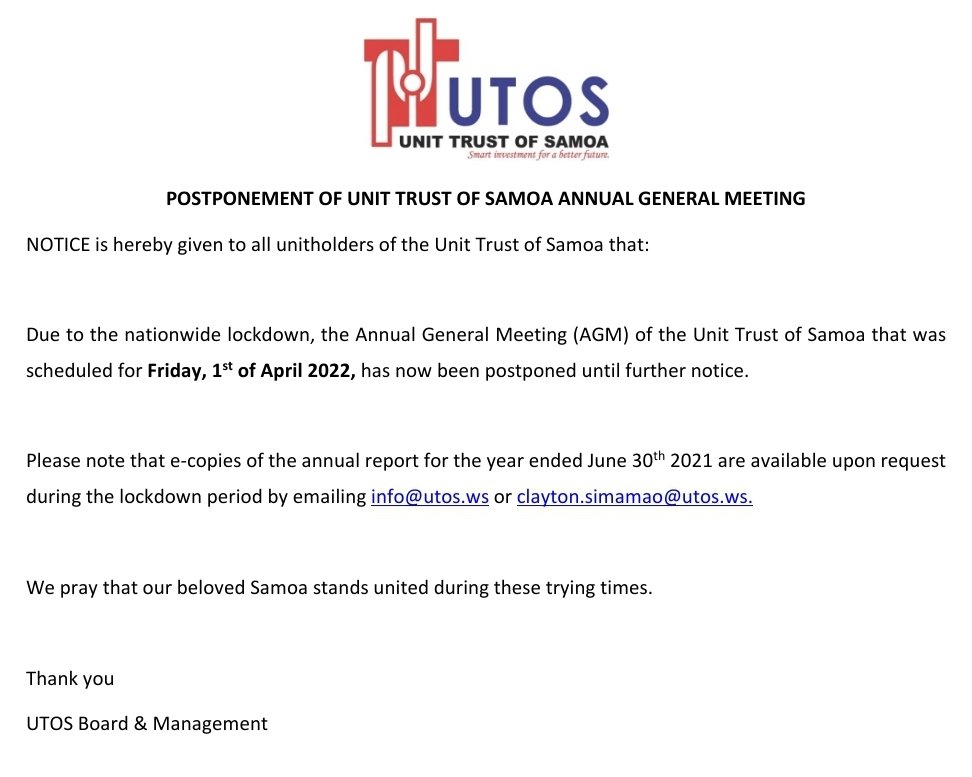