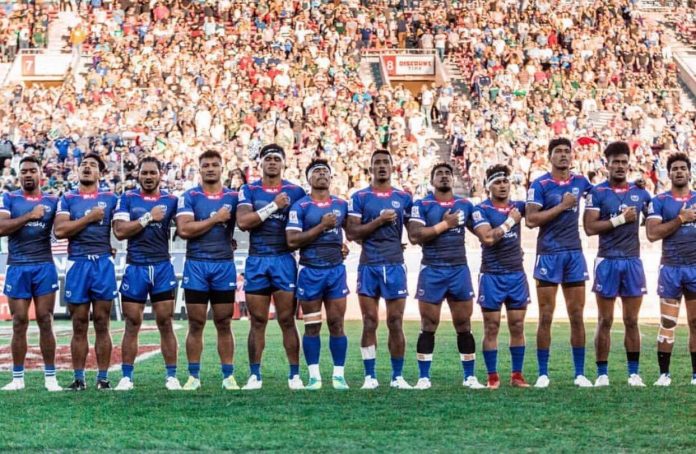 Samoa came into their first match against Canada in good form after making it to the Las Vegas finals the week prior.

With consistency being a big challenge for the men in blue all season, the first game against Damien McGrath’s Canadian side was one to worry about. But Sir Gordon’s boys hushed all the doubters when they ran over the top of Canada with an emphatic 38-7 win.

The points differential in that match would prove crucial when Canada toppled Fiji in one of many upsets of the day.

Next up was Kenya who had a point to prove after falling to Fiji earlier in the day. But the Manu Samoa boys were not phased.

Starving Kenya of possession was key to Samoa’s 28-0 half time lead. Kenya fought back strong but the men in blue were too good and ran away with the match with a final score of 35-12.

With two good victories earlier in the day, Samoa were faced with a Fijian side, now desperate for a win to avoid being in the bottom 8.

Fiji and Samoa traded 1 try each to start the game before Fiji ran in two more tries to finish the first half leading 19-5.

The second half was much more competitive with each team dotting down for 2 tries each. However the Flying Fijians and their offloads were just too good for a valiant Samoan side.