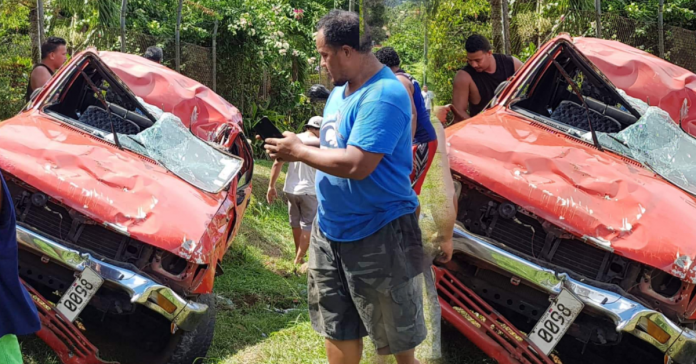 01 April 2019, Apia Samoa. A driver escaped serious injuries after he lost control of a pick up truck travelling down the Cross Island Road to Apia.

According to the owner of the vehicle, the breaks of the vehicle gave up on his driver causing the truck to run off the road to avoid a worse incident with oncoming traffic or vehicles infront of them.

Three boys from the nearby Tanugamanono Primary school told Samoa Global News that the pick up truck ran first crashed into a rubbish stand, then took part of a nearby fencing before it hit a huge rock which caused it to catapult into the air and land facing downwards.

The police took the driver away for questioning. It was not clear if he had been checked for internal injuries given the state of the vehicle and the description by eye witnesses of 2hat had happened.

The owner of the vehicle says he is grateful no-one else was hurt and that the vehicle was clearly a write-off from what he can see.