26 March, 2019 Apia Samoa. Cabinet has approved a long-term lease for the Huanan Fisheries company to build a cool storage warehouse for its transhipment operations.

According to the Minister of Agriculture Lopaoo Natanielu Mua, the details of the lease for just over 3 acres of Government land are being finalised but ultimately Huanan Fisheries plans to build a processing Plant for raw loins in preparation for exports.

Huanan supplies Asian markets and is one of three Asian companies currently utilising the Matautu Wharf for fish transhipment operations. Today, for example, 970 tonnes of skip jacks, yellow fin and big eye from two vessels were offloaded from a purse seiner and long liner.

Lopao’o says the investment by Hunan and other, similar operators is substantial.

“The Samoa Ports also stands to benefit from docking fees and associated costs generated from the transhipment operations,” said the Minister.

“And of course, the fishing crews also have to eat and they will patronize our restaurants and tourism attractions when the crew comes ashore to take a break.

“There’s also money to be made from refuelling and supplies. 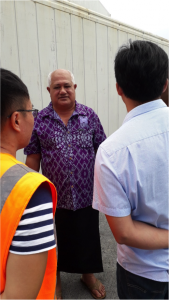 “Samoans are not new to the fish processing industry, having worked for years in the canneries in neighbouring American Samoa.

“The transhipment operation is providing close to 100 jobs every time the fishing vessels dock to off-load.”

“It’s all in line with Government’s push to improve port facilities as a platform for Samoan and foreign investors, to build our trading capacity and of course contribute to our GDP and Foreign Reserves,” says Lopao’o.

A container ship comes to Samoa every two to three months where the catch from the company’s smaller boats are off loaded. But with the Matautu facility, it will speed up turnaround time for trawlers by using a storage facility instead of waiting for the freighter to arrive.

Hunan Fisheries has a fleet of over 30 vessels including 2 purse seiners. It also has business operations in the Federated States of Micronesia (FSM), Cook Islands and the Marshall Islands.

Company officials Junwei Chang, Purse Seiner Operation Manager and Coman Lai the Operation Manager this morning said that as soon as the lease is signed with Government, construction of the cool storage warehouse should start later this year.