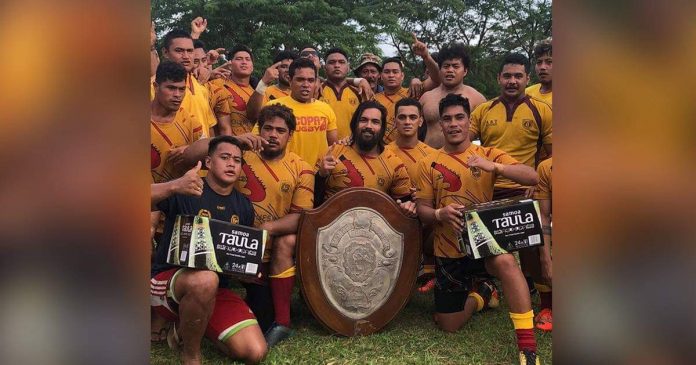 02 February 2019, Apia Samoa. The AST SCOPA rugby club has broken BBE Vaiala’s winning streak and possibly the hearts of the village and supporters by clinching the shield match in the dying seconds.

The Vaiala rugby club held onto the kalikā throughout the 2018 season and have managed to hold off Moataa, Apia and Vaimoso in the first 3 weeks of this season.

Vaiala led 15-9 at half time having maintained most of the territory and posession in the first 40 minutes. During the 2nd half Vaiala extended their lead to 18-9. SCOPA captain Arnold Meredith crossed the line to make it 18-16 with the conversion. In the dying seconds of the match, SCOPA centre put his wing into acres of space to score the winning try against a 12-man Vaiala team.

Captain of SCOPA Arnold Meredith said, “It was team work and a belief in each other. We had to trust each other that we could do it. We knew we had to shut down Patrick Faapale.”

Leavasa said that their side just didn’t seem to bring the same passion today somewhat reflected in the 2 red cards and 3 yellow cards conceded throughout the match.

“SCOPA prepared well and they targeted our strengths by running our tight 5 and focusing on Patrick. They played smart rugby.”

Vaiala held possession and territory for the majority of the match but could not convert this into points.

SCOPA played an open game, spreading the ball from sideline to sideline and kept their discipline during scuffles.

SCOPA will defend the shield against Moataa next week.