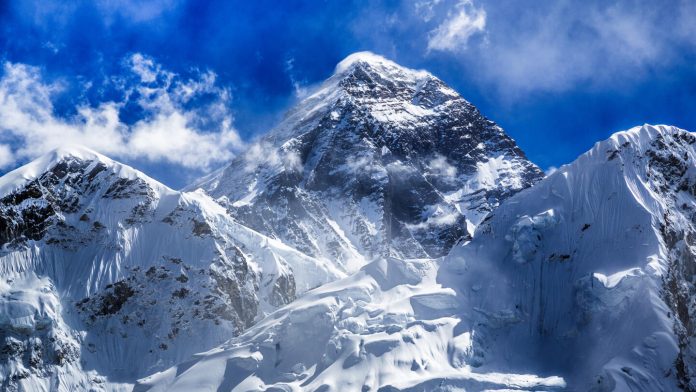 At 11:30 a.m. on May 29, 1953, Edmund Hillary of New Zealand and Tenzing Norgay, a Sherpa of Nepal, become the first explorers to reach the summit of Mount Everest, which at 29,035 feet above sea level is the highest point on earth. The two, part of a British expedition, made their final assault on the summit after spending a fitful night at 27,900 feet. News of their achievement broke around the world on June 2, the day of Queen Elizabeth II’s coronation, and Britons hailed it as a good omen for their country’s future.

Mount Everest sits on the crest of the Great Himalayas in Asia, lying on the border between Nepal and Tibet. Called Chomo-Lungma, or “Mother Goddess of the Land,” by the Tibetans, the English named the mountain after Sir George Everest, a 19th-century British surveyor of South Asia. The summit of Everest reaches two-thirds of the way through the air of the earth’s atmosphere–at about the cruising altitude of jet airliners–and oxygen levels there are very low, temperatures are extremely cold, and weather is unpredictable and dangerous.

The first recorded attempt to climb Everest was made in 1921 by a British expedition that trekked 400 difficult miles across the Tibetan plateau to the foot of the great mountain. A raging storm forced them to abort their ascent, but the mountaineers, among them George Leigh Mallory, had seen what appeared to be a feasible route up the peak. It was Mallory who quipped when later asked by a journalist why he wanted to climb Everest, “Because it’s there.”

A second British expedition, featuring Mallory, returned in 1922, and climbers George Finch and Geoffrey Bruce reached an impressive height of more than 27,000 feet. In another attempt made by Mallory that year, seven Sherpa porters were killed in an avalanche. (The Sherpas, native to the Khumbu region, have long played an essential support role in Himalayan climbs and treks because of their strength and ability to endure the high altitudes.) In 1924, a third Everest expedition was launched by the British, and climber Edward Norton reached an elevation of 28,128 feet, 900 vertical feet short of the summit, without using artificial oxygen. Four days later, Mallory and Andrew Irvine launched a summit assault and were never seen alive again. In 1999, Mallory’s largely preserved body was found high on Everest–he had suffered numerous broken bones in a fall. Whether or not he or Irvine reached the summit remains a mystery.

Several more unsuccessful summit attempts were made via Tibet’s Northeast Ridge route, and after World War II Tibet was closed to foreigners. In 1949, Nepal opened its door to the outside world, and in 1950 and 1951 British expeditions made exploratory climbs up the Southeast Ridge route. In 1952, a Swiss expedition navigated the treacherous Khumbu Icefall in the first real summit attempt. Two climbers, Raymond Lambert and Tenzing Norgay, reached 28,210 feet, just below the South Summit, but had to turn back for want of supplies.

Shocked by the near-success of the Swiss expedition, a large British expedition was organized for 1953 under the command of Colonel John Hunt. In addition to the best British climbers and such highly experienced Sherpas as Tenzing Norgay, the expedition enlisted talent from the British Commonwealth, such as New Zealanders George Lowe and Edmund Hillary, the latter of whom worked as a beekeeper when not climbing mountains. Members of the expedition were equipped with specially insulated boots and clothing, portable radio equipment, and open- and closed-circuit oxygen systems.

Setting up a series of camps, the expedition pushed its way up the mountain in April and May 1953. A new passage was forged through the Khumbu Icefall, and the climbers made their way up the Western Cwm, across the Lhotse Face, and to the South Col, at about 26,000 feet. On May 26, Charles Evans and Tom Bourdillon launched the first assault on the summit and came within 300 feet of the top of Everest before having to turn back because one of their oxygen sets was malfunctioning.

On May 28, Tenzing and Hillary set out, setting up high camp at 27,900 feet. After a freezing, sleepless night, the pair plodded on, reaching the South Summit by 9 a.m. and a steep rocky step, some 40 feet high, about an hour later. Wedging himself in a crack in the face, Hillary inched himself up what was thereafter known as the Hillary Step. Hillary threw down a rope, and Norgay followed. At about 11:30 a.m., the climbers arrived at the top of the world.

News of the success was rushed by runner from the expedition’s base camp to the radio post at Namche Bazar, and then sent by coded message to London, where Queen Elizabeth II learned of the achievement on June 1, the eve of her coronation. The next day, the news broke around the world. Later that year, Hillary and Hunt were knighted by the queen. Norgay, because he was not a citizen of a Commonwealth nation, received the lesser British Empire Medal.

Since Hillary and Norgay’s historic climb, numerous expeditions have made their way up to Everest’s summit. In 1960, a Chinese expedition was the first to conquer the mountain from the Tibetan side, and in 1963 James Whittaker became the first American to top Everest. In 1975, Tabei Junko of Japan became the first woman to reach the summit. Three years later, Reinhold Messner of Italy and Peter Habeler of Austria achieved what had been previously thought impossible: climbing to the Everest summit without oxygen. More than 300 climbers have died attempting to summit the mountain.

Everest’s deadliest day occurred on April 25, 2015, when 19 people were killed in an avalanche at base camp following a 7.8 earthquake, which killed more than 9,000 people and injured more than 23,000 in Nepal.

A major tragedy occurred in 1996 when eight climbers died after being caught in a blizzard high on the slopes in an incident made famous by Jon Krakauer’s book Into Thin Air. Krakauer’s book did nothing to stem the tide of people willing to shell out tens of thousands of dollars for a chance to summit Earth’s highest mountain. Traffic jams have been reported near the top, and a fistfight broke out in 2013 between three European climbers and more than 100 Sherpas, over what the guides deemed to be rude and dangerous behavior during an attempted ascent. Meanwhile, the deaths keep coming, including over 10 in 2019.