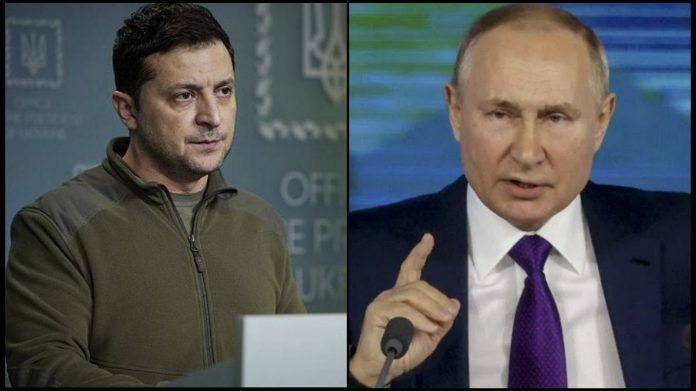 Putin said in a meeting of top officials shown on state TV that the move, which means the country’s nuclear weapons are prepared for increased readiness to launch, was in response to NATO powers making what he called “aggressive statements.”

Russia, like the United States and NATO forces, has thousands of nuclear warheads that it maintains as a deterrent to an attack.

Russia and Ukraine to Hold Talks in Belarus

Zelenskyy earlier said that his government would not attend negotiations in Belarus, a close ally of Moscow’s where thousands of Russian troops massed in the lead-up to the invasion last week.

Ukraine President Volodymyr Zelenskyy had vowed his country would stand its ground against Russia’s brutal attacks, even responding to an evacuation offer from the US by stating, “I don’t need a ride, I need ammunition”.

Zelenskyy has now issued a statement saying he has spoken with Belarus President Alexander Lukashenko and agreed to meet with the Russians “without preconditions.”

“The delegations will meet on the Ukrainian-Belarusian border, near the Pripyat River”, Zelenskyy added.

It was not clear if he would attend the talks himself or remain in Kyiv.

Zelenskyy’s office said Lukashenko, a Putin ally, “has taken responsibility for ensuring that all planes, helicopters and missiles stationed on Belarusian territory will remain on the ground during the Ukrainian delegation’s travel, talks and return.

Russian missiles are reported to have attacked an oil tank in the Ukranian town of Vasylkiv, southwest of Kyiv. Russian forces have also targeted a gas pipeline in Ukraine’s second largest city, Kharkiv, where firece fighting was reported throughout Saturday night.

Ukraine’s State Service of Special Communication and Information Protection warned that the explosion, which it said looked like a mushroom cloud, could cause an “environmental catastrophe” and advised residents to cover their windows with damp cloth or gauze and to drink plenty of fluids.

BBC have shown a video of Ukrainian forces fighting off Russian troops in Kharkiv and the region’s governor Oleh Synehubov has stated the city was now rid of Russian troops – after street-to-street fighting overnight.

Thousands spent the night in basements and shelters, with intense shelling described by one resident as “something like Star Wars above your head”.

“The wave of the blast was so strong that my ears popped,” another said.

A nine-storey residential tower was hit, emergency services said, killing an elderly woman while about 60 people survived after hiding in the basement.

Kharkiv residents who spoke to the BBC told of their fear and apprehension as the attack raged on, as well as their pride in Ukrainian forces and reservists in holding back Russian troops.

Just before an explosion in the Saltivka district, one woman said her neighbour was instructing their young children on what to do in the event of a blast.

“Listening to this was horrific, my hairs were standing on end at the thought that three-year-old children were having to be taught what to do during shelling,” she said.

“Throughout the night one young girl kept waking up her mum. She’d sit up crying screaming: ‘Mom, I’m scared, please save me, save me now.’

“She only calmed down by the morning after her mum had sat holding her all through the night.”

The 34-year-old, who requested anonymity, added: “Right now, the offensive against the city is still going on. I hear the blasts all the time – even though I know Kharkiv is controlled by Ukraine, 100%.”

“Tanks were fighting only a few kilometres from our home, and the operation to counter some saboteurs that entered Kharkiv was just next to our yard,” he said.

“We are staying in our house with a cellar, it’s my wife and me, two sons who are seven and 11 years old, and my 80 year old mum. We keep the boys in the cellar most of the time,” he added.

Maria Avdeev, another resident, said groups of Russian troops were eliminated “one by one” by the Ukrainian military.

“Also, a number of Russian soldiers and officers were captured, so they did not basically fight back, when they saw that they had no other option,” she said.

Oleksii Svid, 30, managed to travel to buy food for his family and his pets, Kuzya the cat and Larry the dog, on Saturday but found supplies were running low.

Nonetheless, he said many local people remained resilient – with talk about how to prevent Russian troops from entering the city and ways to help the Ukrainian army.

“The main issue right now it to gain access to the food, as most shops don’t have a way to refill stock of sugar, flour, dairy, and meet,” he said. “There’s also a shortage of fuel in gas stations in the city.

Other developments as the Russian invasion entered its fourth day: