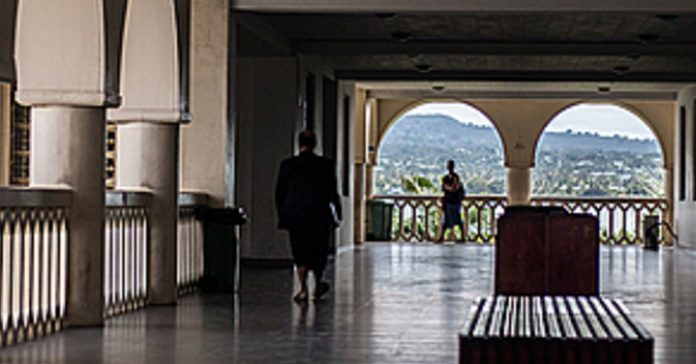 22 July 2019, Apia Samoa. A 17 year old youth pleaded guilty to stealing property from Team Papua New Guinea during the Pacific Games. Police confirm that all stolen property was returned  to Team PNG and the youth has been referred to Alcohol and Drugs Court saying he was drunk at the time.

Team Papua New Guinea were residing at the Faleula Athlete Village and had been attending the Games Opening Ceremony at the time of the offending.

According to police reports Tele Lemalu, of Afega and Matautu Lefaga, unlawfully entered the house where the Papua New Guinea Team were staying using a fake ID. The Court heard that he had taken 16 passports, a laptop and charger, 1 computer keyboard, 2 mobile phones and chargers, and a school bag.

The incident occurred on the 9th of July, just one day into the Pacific Games.

According to the police report all the stolen items belong to one person named Ronney Titi. This made Justice Leiataualesa question prosecution, if in fact all items belonged to the same person, given that there were 6 passports.

Leone Su’a-Mailo told the Court that one of the 16 stolen passports had belonged to Mr. Titi,

Justice Leiataualesa then told prosecution that police should have named all the 16 individuals who owned the stolen passports instead of just one person.

The matter was referred to the alcohol and drugs rehabilitative program  because the 17 year old told the Court that he was intoxicated during the incident.