The Lanulau’ava Students Association (LSA) in partnership with Samoa Conservation Society (SCS) are calling for Samoa to join the global Earth Hour this Saturday 27 March at 8:30pm to raise awareness for a sustainable environment.

Earth Hour began in Sydney as a lights-off event in 2007, and now held annually by conservationists and climate change advocates across the globe, organised by the World Wide Fund for Nature.

Occasionally, in years when Holy Saturday falls on the last Saturday of March, Earth Hour is moved to a week early rather than its usual date.

The event is more of a symbolic movement than an energy/carbon reduction exercise, and in Samoa, individuals, communities and businesses are encouraged to observe Earth Hour by turning off non-essential electric lights for at least 10 minutes between 8:30 – 9:30pm this evening.

The group of passionate youth members of LSA were given the opportunity to lead Earth Hour on behalf of the Samoa Conservation Society, which they’ve merged into a more extensive project called, “The future of the Green Pacific” and in Samoan, “Lo’u Lumana’i Lanulau’ava.”

President of LSA Grace Ah Young told Samoa Global News the call is for all of Samoa to observe Earth Hour from wherever they are tonight, even if just for 10 minutes if they are unable to turn off lights for the whole hour.

A special event will be held by candle light this evening at the Yacht Club at Mulinuu and Ms Ah Young says everyone is welcome to join.

“It would be our pleasure to have you there to witness this special event and be able to celebrate the goodness of our planet towards us,” she said. 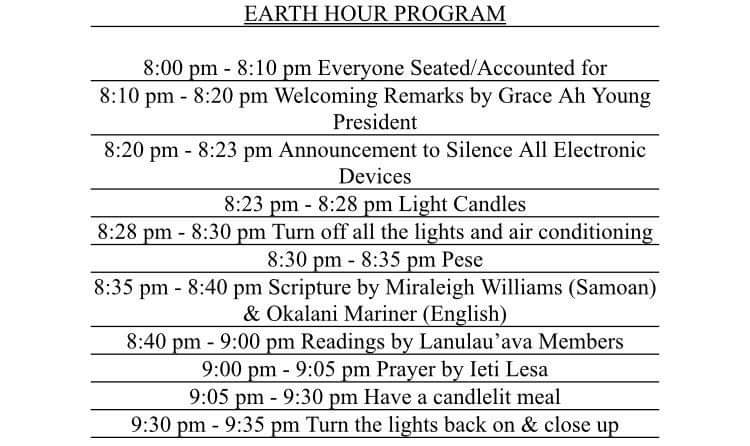 The President of LSA says initiatives such as Earth Hour encourages everyone to become part of the solution and not the problem.

“We are choosing to stand up and fight against climate change, and we invite you to join us!” she added.

Across the globe, Samoa will be the first country in the world to celebrate Earth Hour.