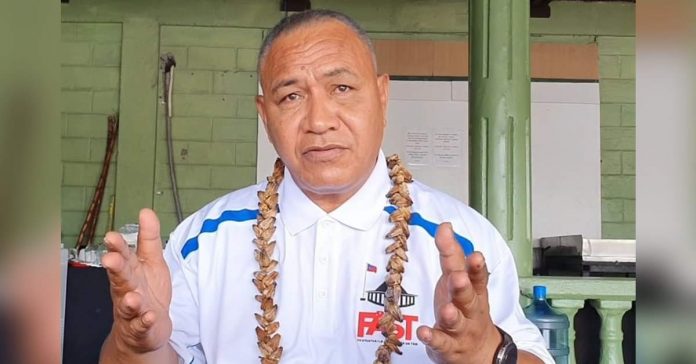 29 October 2021 Apia Samoa. Two Independent Members of Parliament, Olo Fiti Afoa Vaai and Faumuina Leatinuu Wayne Fong have each received letters from the Speaker of the House advising that their parliamentary seats have been deemed vacant, quoting sections of the Samoa Electoral Act intended to prohibit MPs from crossing the floor.

In separate letters to each MP, Hon Leaupepe Taimaaiono Toleafoa Faasisi says Olo and Faumuina have breached s140(4) of the Electoral Act by failing to remain as independent members for the entire parliamentary term.

The current 5-year parliamentary term officially ends at the dissolution of Parliament in January 2021.

Until recent amendments, Parliament would dissolve before candidate nominations closed, allowing sitting MPs to switch allegiance between terms and not during a parliamentary term.

One of the few opposition MPs in Samoa’s Parliament, Olo Fiti Vaai says the newly enacted laws and recently imposed legal requirements do not allow an Independent MP to choose a political party for a future term.

He says the laws, as they are written and applied, placed him in the middle of a rock and a hard place.

He adds that it is important to follow the legal process and believes that the Constitution safeguards Members of Parliament, by giving the Supreme Court the power to decide.

“The Speaker has quoted s46 of the Constitution, but we are coming from s47 where right of a person to remain a Member of Parliament, is determined only by the Supreme Court,” says Olo.

Olo maintains that he has kept the oath he took in 2016, to remain an independent member for this parliamentary term, however, the timing of candidate registrations has put them into this position.

Faumuina Leatinuu Wayne Fong says they had both expected this decision, and the matter is now with their lawyers.

Faumuina says he believes the intention of the current legislation, is to stop MPs from crossing the floor, or switching party allegiance during the parliamentary term.. “and that is not what is happening here..”.

Faumuina says this gap only exists because candidate nominations now close three months before the dissolution of Parliament.

“We had no choice but to honestly declare that for the next parliamentary term, we are choosing to run as members of FAST”, says Faumuima.

In his letter, the Speaker of the House states that he must act in accordance with S142(1) of the Electoral Act 2019, and Parliamentary Standing Orders 21(6), that requires him to charge the Independent MPs with vacating their seats for failing to remain as Independents for the Parliamentary Term.

The Speaker also states that he has received confirmation from Electoral Commissioner Faimalomatumua Mathew Lemisio that the two Independent MPs have officially registered as FAST members for the upcoming elections.