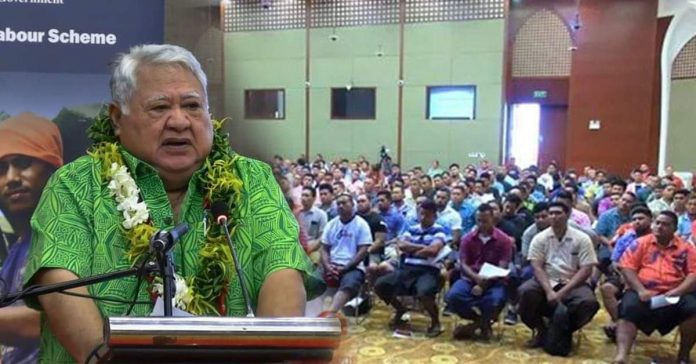 Rules are important in every aspect of life. That was the reminder Prime Minister Tuilaepa Dr. Sailele Malielegaoi impressed upon a new batch of Recognised Seasonal Employees (RSE workers) preparing to depart Samoa this month for New Zealand.

Tuilaepa did not take long to get his point across to the group of more than 100 men and a few women, who packed the Tui Atua Tupua Tamasese Efi conference room yesterday morning.

“I want you to remember, your attitude determines your success where you are going. I understand that some of you are young so heed this advice I am giving you right now,” he said.

Over 700 Samoan citizens have qualified for the RSE scheme, and will be working in New Zealand over the next few months. The RSE scheme places close to 3,000 workers from Samoa on temporary assignments in New Zealand, with a similar scheme called the Seasonal Workers Program (SWP) for Australia.

The Prime Minister congratulated the group and stressed the importance of leaving a good impression of Samoa while being employed overseas.

“Your attitude is your most important quality. When you are there, do not do anything stupid that it will have you sent back to Samoa, then you may never get a chance for these opportunities again,” he said.

“This opportunity is for you to earn money for your families..

“Portraying a clean image for your country of Samoa is of the utmost importance,” he added.

The Prime Minister did not mince his words as he dealt directly with common issues that arise from time to time amongst RSE workers in the past, such as alcoholism, social affairs and general disobedience to rules and protocols.

“When you are in New Zealand, you will be enticed by the idea of drinking while you’re there,” he said.

“I tell you, that first bottle of beer could be your last to drink in New Zealand soil. Stay away from unnecessary habits, drinking will open the door for trouble for you and your colleagues while you’re in New Zealand,” he said.

“If you are married, do not entertain the idea of having an extramarital affair while you’re employed overseas.

“Follow the rules provided to you by your caretakers, and make sure you don’t do anything that will spoil the good name of the country. The government strives to ensure we provide these opportunities to our people, so you are the flag bearers for Samoa, make a good impression.”

Of the 700 plus to be employed in New Zealand, 624 have been confirmed by the Ministry of Commerce Industry and Labor to be departing this month on four separate flights. Another flight is booked for February to take the rest.

The Samoa RSE workers will be housed by their employers while staying in New Zealand, and will undergo a 14 day quarantine period before they head out into the farms to start work.