With an estimated one billion viewers from around the globe watching the opening ceremony of the Birmingham Commonwealth Games, a 20-year-old Samoan wrestling athlete took off his shirt to showcase Samoa’s tatau – a centuries-old traditional warrior tattoo of intricate patterns worn by men, from waiste to knee.

The young wrestler took to the world stage with his red ulafala and stole the show during Samoa’s few minutes of fame infront of 30,000 spectators packed into Birmingham’s Alexander Stadium, including the Prince of Wales and members of the royal family. 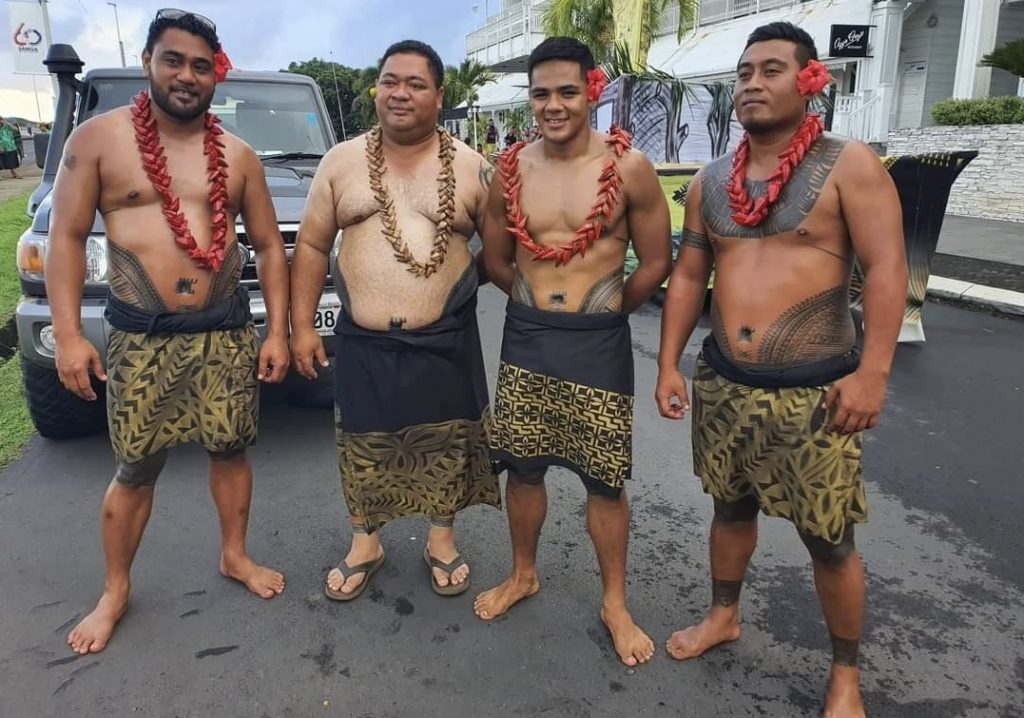 Taitaifono Tamati charismatically danced his way across the centre stage while his new-found fans from around the globe as well as Team Samoa, cheered him on.

Samoa’s Chef de Mission, Sulā Dengue Soonalole-Sam Chong said with the cold weather and the flu going around, she did not want to put any pressure on team members with traditional tattoo attire – to take off their shirts.

“But I was happy when he came up to me and asked if he could dance behind our two flag bearers.. of course as soon as we got on stage, Fono stole the show.. we were all screaming and cheehooing while he was in his element,” describes the CDM.

“Fono is a well mannered young man and humble as well. He is definitely enjoying this experience,” adds Sula. “He competes on August 5th”.

With Samoa’s international borders re-opening to the world in a few days, the imagery of the young Samoan proved to be an awesome marketing strategy for his small island nation.

“I wanted to show the world a little glimpse of what Samoa has to offer, and the hospitality of our people they’ll all get to experience.. when they book and come visit us!” says the young Commonwealth Games athlete-entertainer.

The world watched on as Tamati did his part to complement Samoa’s “Beautiful is Back” campaign, by performing the tranditional faataupati during Team Samoa’s march across the centre stadium.

Who is this young lad from Samoa who made the most of the opportunity to catch the world’s attention during the opening ceremony?

Taitaifono Adam Eti Tamati is the son of Reverand Bismarck and Leilani Tamati. He is the eldest with five younger siblings; 3 brothers and 2 sisters.

He joined wrestling just two years ago and worked hard to qualify for the Commonwealth Games. He lived nearby the wrestling gym and at first, he just went along to faaafu and get a bit of exercise, but soon fell in love with the sport.

Taitaifono is an all-rounder eldest son of the Uniting Christian Church of Samoa faifeau. He is a Sunday school teacher, a youth leader, and a tenor in the Church choir. He is also a member of the NUS orchestra, playing the cello.

His academic story is inspiring for youth especially those who may be late bloomers.

Taitaifono attended Vaitele-Uta Primary school “where he was last in class, and last in level..” shares his mother in response to questions from Samoa Global News. He then attended several Primary Schools including Samoa Primary at Vailele, Le Amosa at Vaitele, Robert Louis Stevenson School and finally Apia Primary.

Taitaifono eventually settled down in high school, at Samoa College where he was a Best All Rounder Year 12 student.

And fast forward to his final year in 2020, and Taitaifono topped Foundation Accounting and was one of the top Mathematics students in UPY – the National University of Samoa’s University Prepatory Year.

Having completed UPY the Samoa College Old Pupil (SCOPA) is now waiting to start his degree in Actuarial Science with Victoria University, in Wellington NZ on a government scholarship.

At just 19 he had his traditional tatau done by Su’a Suluape Faalili at Manono-Tai. He has attended his paternal grandfather’s Village Council meetings at Sapunaoa Falealili where he has taken his turn to tautu ava at the traditional cava ceremony.

As an athlete, Taitaifono is inspired by athletes on both sides of his family. His uncle Earl Vaa was a former flyhalf for Manu Samoa and on his Dad’s Masinalupe side, he is cousins with the former Manu Samoa Pisi brothers from Safaatoa Lefaga.

During his UPY year he was a Marist elite rugby squad member but had to pull out to prioritise his studies.

Taitaifono loves farming and is part of a koko plantation project under SKIA (Samoa Koko Industry Association) where he is one of the youngest members.

He and his siblings are now growing ava Samoa and vanila in efforts to find alternative crops to taro and bananas.

His cousins at the village say he comes to the farm at Sapunaoa on the weekends and trains up the mountains. “E kolegi i luga o le mauga”.

So win or lose at the games, Taitaifono has already clocked a win for Samoa with his demonstrated invitation to visit Samoa, sent to millions of people around the globe.

“The happy people of Samoa are waiting for your visit”.