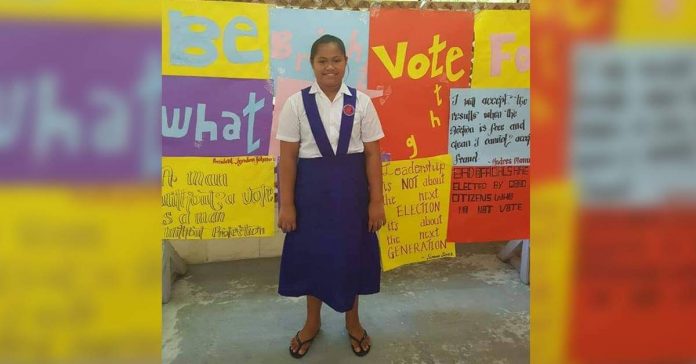 01 March 2019, Salelologa Savaii Samoa. Atamamao Elisaia of Satupaitea has highlighted some of the existing issues with Samoa’s national election process in a poem that captured the hearts of the audience during National Day celebrations held in Savaii today.

Atamamao Elisaia of Satupaitea entered a poem entitled “What I Know About Elections in Samoa” which hits at the essence of ‘playing politics’ in the first verse of her poem, but ends with 2 verses that sheds light on the common notion of ‘taufaavalea’ or ‘being fooled’ by voters during the lead up to national elections.

“Our Country is founded on God, We have laws and policies there on, Leaders were chosen from every district, To voice the people’s rights, Not to play politics.”

The poem goes on for 7 verses, and in the last 2 verses, Atamamao’s words gives insight to the youth perspective, as they observe attitudes and behaviours of adults during national elections.

“Some will cry, Some were lying, Some just pretend, That he was their best friend, But he was a crook at the end.”

“Others will have big parties, Drink beers and eat lots of food, Many will beg, We were on your side, You were never being fooled.”

The Office of the Electoral Commissioner posts, “In a subtle manner, her thoughts capture the reality of our elections. It’s great to see the elections form the eyes of our young people.”

This year’s celebration targeted students from both Primary and Secondary schools, encouraging them to take part in several competitions such as poems, speeches and debates aimed at raising awareness and knowledge about elections in Samoa. 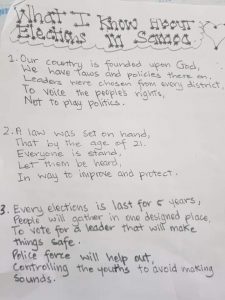 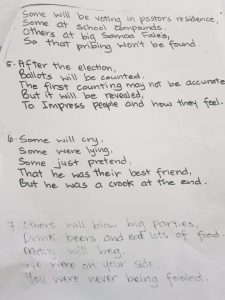