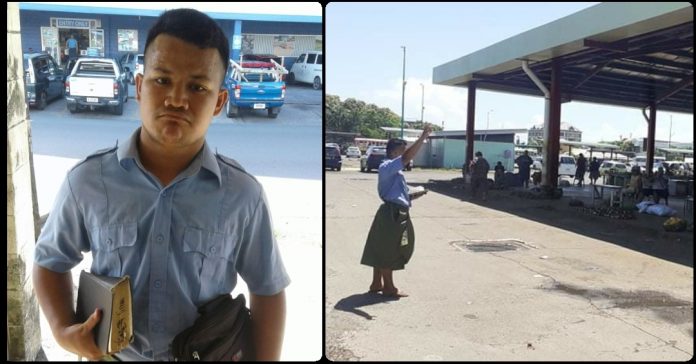 A young man who spends three days a week as an evangelist in Apia has been banned from preaching at the Fugalei Market until proper permission is sought from market owners, the State Owned Accident Compensation Corporation (ACC).

Viane Fiu Siaosi is a 19 year old who has decided that his calling is to spread the Word of God. He told Samoa Global News that his usual spots are the SNPF Plazza and the Savalalo Market bus shelter. However this past week, he says he was prompted to preach at the Fugalei market, but was stopped by the manager.

Mr Siaosi says he spends two days of the week selling products from wholesale stores to help his family with income, but feels strongly about his preaching and spends three days a week on it. He says he was surprised when he was stopped on Wednesday by the Fugalei market manager.

Atoamafuaipolu Tauloa Lui who manages the market at Fugalei confirmed he did ask the young man to refrain from preaching infront of the market, because he had not sought permission, nor been cleared by the ACC (Accident Compensation Corporation) General Manager.

According to the Fugalei Market Manager, activities such as this need clearance from the ACC Head Office.

Atoamafuaipolu added that even if permission were granted, the young preacher would have to ensure he did not get in the way of market vendors and customers.

“There are certain places he can go to such as infront of the bus shelter,” he said. “Safety and being in the way of vendors while they serve their clients is also another factor to consider,” said Atoamafuaipolu.

Viane Fiu Siaosi, however, says that the Word of God need not seek permission from anyone.

“It is the Word of God, and it does not need permission to be preached,” he told Samoa Global News.

Mr Siaosi says he will continue with the spots in Apia that needs no permission, to await the decision of ACC, and hopes to return to the Fugalei Market.